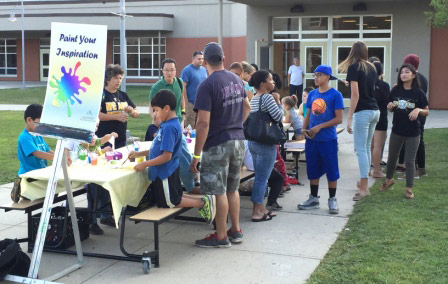 In 2014-2015, the Piscataway School District began a book club, which engaged students in the work of educational and motivational leaders such as Yvette Jackson (The Pedagogy of Confidence) and Stephen Covey (The Seven Habits of Highly Effective People.

From there, a new program for the 2015-2016 school year was born:You…I…We Inspire. Throughout the year, and beyond, the district is striving to inspire every student, staff member and family to set a tone that helps lead students to make positive choices—in short, to lead and inspire by example.

To kick off the project, the district created a logo and signs for every school and featured You…I…We Inspire prominently on the district website, in its calendar and in other publications. In addition, Piscataway hosted a district-wide family fun event, called the Fall Festival, held the afternoon before Piscataway High School’s first home football game. The fest featured activities that are fun and encourage team work and acceptance. Children assembled a giant custom-designed jigsaw puzzle, of the You…I…We Inspire logo; took part in team-building scarecrow stuffing; and enjoyed hayrides and a tailgate dinner.

Teamwork, acceptance and inspiring others to do their best have become the theme in Piscataway.

Submitted by the district.