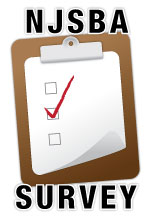 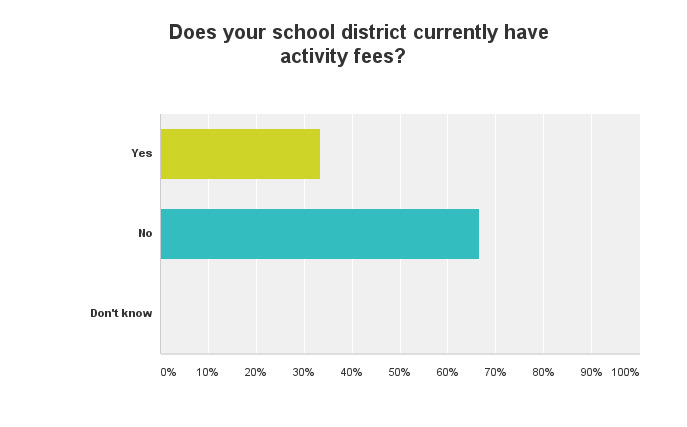 Of those districts that do charge activity fees, 53.33 percent charge a flat fee for the entire year, 30 percent charge per activity, and 16.67 percent checked the “other” selection. Comments in that section indicated that some schools charge for each sport, but a single fee for all clubs; another district only charges for participation in ice hockey, due to the high fees involved; still another noted that the district has a flat fee, but there are discounts for multiple family members. 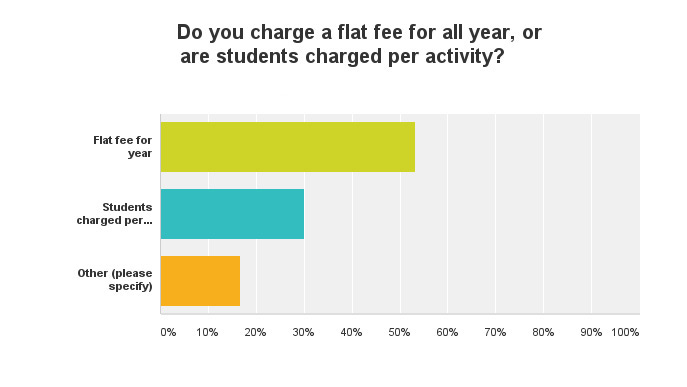 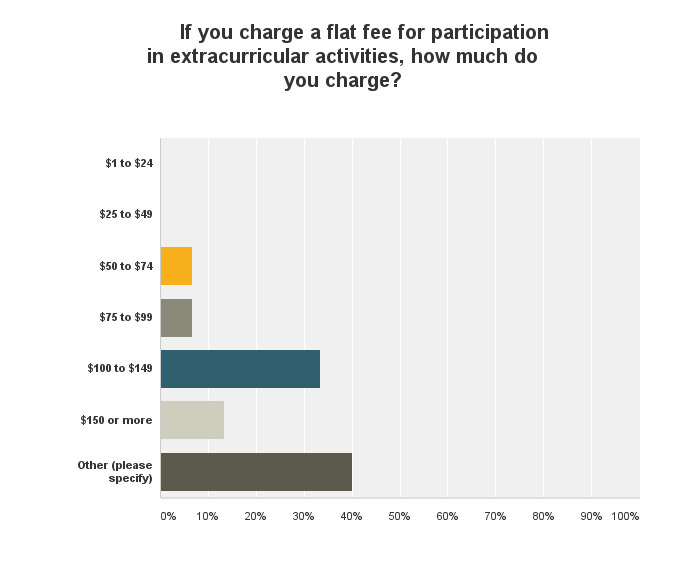 Per Activity Fee Ranges Among the districts that charge activity fees on a per-activity basis, it is common to charge more for some activities.  Some 64 percent differentiate in their fees, while approximately 30 percent do not.

Among those respondents who noted their districts charge a per-activity fee that is constant for all activities, the most common price range was more than $50.

How Much for Different Activities?  The survey asked School Board Notes readers the per-activity fees charged for different types of activities.

Two-thirds of respondents indicated that their districts do not charge for participation in academic-type organizations, such as academic honor societies.

Band, musical and performing arts activities saw a range of activity fees, as well. While 30 percent charge $100 or more, 20 percent each charged $24 or under, $25 to $49, and $50 to $74.  Ten percent indicated there was no charge for musical or performing  arts activities.  Extracurricular clubs had the lowest fees:40 percent of respondents indicated charges are $25 to $49, 20 percent said charges are $1 to $24 and 10 percent are $50 to $74.   Another 30 percent of respondents chose the “other” option, and indicated in comments a different fee structure. Typical of comments was one that noted that all school activities are designated as either Tier 1 (and cost $100)  or Tier 2 (and cost $50).

Fees Here to Stay  Not surprisingly, in districts that charge an activity fee, none are considering eliminating  them entirely, although 15 percent  of respondents indicated that the fees are being reduced next year.

Districts Without Fees Holding the Line  According to the survey responses, districts that don’t currently charge fees are, for the most part, not considering them for the 2015-2016 school year. About 85 percent of respondents aren’t considering enacting fees next year; while only 3.7 percent are considering such a course of action. About 11 percent said the matter is still under discussion. 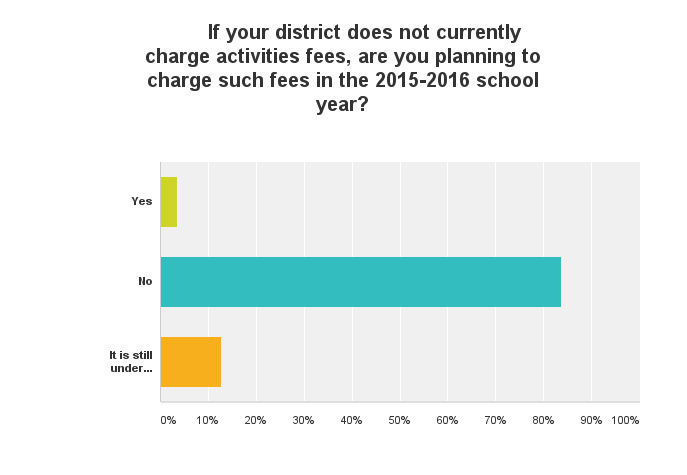 We are a poor district and it would be unfair to most of our students to charge an activity fee.

It is our responsibility to educate the whole child. Part of doing that is recognizing that activities are an important way to reach some of our students. Some activities have direct curricular connections, others do not; however they all help in providing non-academic education. The ability to deal with others, tolerance, practicing leadership roles and communication skills, to name a few. In a free public school, we cannot afford to risk losing a child because that child cannot afford to pay in order to participate in an activity.

No way! Many students can’t even afford lunch let alone an activity fee.

I feel there should be a fee for all after-school co-curricular participation with a cap so no child is deterred because of cost.

Our district strongly believes that fees should not be charged.

It would lower participation, make it more of a problem with the haves and have-nots, and damage the overall school environment.

They were started in our district for 2 reasons: first, to help with the loss of state aid several years ago and second, as a “user fee.” I think they are still valid.

Let the parents pay for the extras, not the town.

With the 2 percent cap really limiting the budget I can see us looking at them in the near future or even next budget.

This became necessary when our state aid was totally eliminated a few years ago. Since then we now receive about 55 percent of what we used to get. Free lunch pupils are not required to pay and there is a maximum fee per family with multiple children.

They are necessary to keep money in the classroom. As a parent of a child on a travel soccer team the total amount I spend for a year is about $1,000. To pay $100 is a bargain especially since the programs are not mandated. Unless the state fixes its fiscal problems I see activity fees going up or sports being eliminated in the next 10 – 15 years.