Martha Wilson, president of the Camden Board of Education, died on Friday, April 17, after suffering a heart attack. She was 67.

She first joined the Camden board in 1997. She has also been active in NJSBA committees, including as a member of the Legislative Committee, Urban Boards Committee, and Resolutions Subcommittee, and as a representative to the NJSBA Delegate Assembly, as well as the National School Boards Association Delegate Assembly.  She was also active in the Camden County School Boards Association.  She earned the designations of Master Board Member, and the Certified Board Leader from NJSBA’s Board Member Academy.

A graduate of Camden High School, she attended Camden County College and Rutgers University.  After college, she became the first African-American to work in the Campbell Soup Co.’s medical department, and later worked for the RCA Corp. in its accounting department.

She was active in the Camden Education Fund, a non-profit that raises funds for the schools, and attended Nazarene Baptist Church and Kaighn Avenue Baptist Church.

“Martha was a strong advocate for children, a supporter of public education and a true friend of the New Jersey School Boards Association,” said Dr. Lawrence S. Feinsod. “She was a long-term member of the Legislative Committee, and represented NJSBA at the National School Boards Association Delegate Assembly and other events. We mourn her loss and we extend our deepest condolences to Martha’s husband, Sheriff “Whip” Wilson of Camden County, her family and the Camden City school community.” 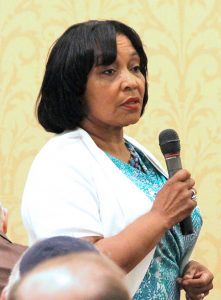