A late-arriving Labor Day – the holiday falls on Sept. 7 – is helping send many New Jersey school districts back to class earlier this year.

More than 40 percent of respondents to an NJSBA survey about the start of school reported they are starting classes earlier than usual this year. More than half of the total respondents – 54.6 percent – said school will begin before Labor Day.

“We want school to end in the second or third week of June. To accommodate this, we needed to start before Labor Day this year,” said one school board member, whose district will be heading back to class earlier than usual this year.

A total of 41.74 percent of survey respondents reported their school year will start earlier this year; 20.87 percent said they will be starting later; and 37.39 percent said there is no change.

This year, are classes starting earlier or later than usual? 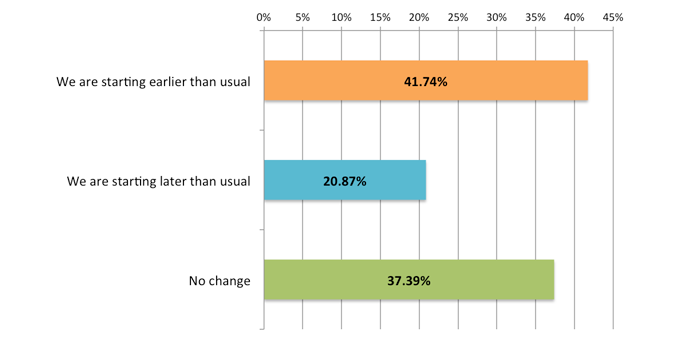 The informal survey conducted in mid-August in NJSBA’s online news publication, School Board Notes, received 119 responses from school administrators, school board members and other School Board Notes readers.  Some districts had multiple responses.

An overwhelming majority of respondents, 84.35 percent, said Labor Day was a factor in determining the first day of classes. Other factors cited were snow days; attempts to avoid hot school days in June; teacher contracts; and concern about maximizing time in the classroom, prior to standardized testing.

“The first day of school ultimately affects the last day of school, and in recent years June has been a hot month. Hopefully starting before Labor  Day would help us avoid these hot days at the end of June,” wrote one school board member.

“On a personal note, I believe it is best for the students to get as much time in the classroom before testing – AP exams or other standard tests – and going to school late in June really does not help with that preparation,” the respondent continued.

This year, with Labor Day falling on the latest day possible – Sept 7 – School Board Notes is asking readers, when will their students go back to school?

Assembling a school district calendar is a complicated task. Proposed calendars are developed by district administration, recommended by the superintendent to the local school board, and approved by the board of education at an open public meeting. The process is usually completed the spring prior to a school year starting. Calendars must include 180 days of instruction each year.

Many factors go into developing the calendar, including holidays; high school graduation dates; professional development days; district traditions such as spring or winter breaks; and snow days.  Adding to that, some educators feel that staying into late June is less educationally sound for students.

“The reality is you get more done in the beginning of the year,” said one respondent whose district is starting classes before Labor Day this year, earlier than usual.

In New Jersey, while most public schools traditionally started after Labor Day, some in recent years began returning to class in August. One Hunterdon County respondent said the change has helped student achievement.

“By starting in August, we have more teacher on student time before state test. We also get out before the heat of summer,” wrote the respondent.

Some calendars reflect unique issues. One district, in Atlantic County, reported it tries to end the school year as early as possible in June due to summer tourist season. One district will start class later than usual, after Labor Day, due to school construction. In some areas and regional school districts, districts try to coordinate schedules.

In many districts, teacher contracts are a factor, too. While some districts have pushed starting dates up to August in recent years, many contracts stipulate that teachers may not begin before Sept. 1.

And some educators still feel the traditional post-Labor Day start is best.

“We look to have consistently full weeks in September so that students can adjust to their new routines and teachers,” wrote one superintendent, whose district begins class the day after Labor Day. “Too many short weeks tend to wreak havoc with this.”