Dr. Lloyd Newbaker Jr. of Delaware Township, died July 18 at his home, surrounded by family, at the age of 87.  He was executive director of the New Jersey School Boards Association from 1978 to 1985.

During his tenure as the Association’s executive director, the NJSBA expanded its services to boards of education in policy, labor relations, amicus intervention in legal cases of statewide impact, and other areas. The Association also spearheaded legislation that enabled school boards to participate in joint insurance funds. The result was the now-independent New Jersey Schools Insurance Group.

Dr. Newbaker also served as president of the National School Boards Executive Directors Association, and served on the NSBA Board of Directors.

A lifelong educator, Dr. Newbaker began his career as a teacher in Abington Township, Pa. and later served as a school principal in Pen Argyle, Pa.

He also served in the Hopewell Valley Regional School District in Mercer County, where he was the first principal at the Bear Tavern Elementary School.

After leaving NJSBA in 1985, Dr. Newbaker became special assistant to Commissioner of Education Saul Cooperman and assistant commissioner of vocational education.  After retirement, he worked as an educational consultant.

In the article, Dr. Newbaker praised the NJSBA staff, Association leadership and the state’s local school board members for their contributions. “It is reassuring that the modern NJSBA is competent to face and deal with current New Jersey education issues,” he wrote. “I like what I see happening at NJSBA and encourage the organization and staff to do all it can to continue delivering a high level of service to local boards of education and board members.”

A memorial service was held on Saturday, July 27 in Lambertville. In lieu of flowers, donations in his memory may be made to Fisherman’s Mark, 37 S. Main St. Lambertville, N.J. 08530. 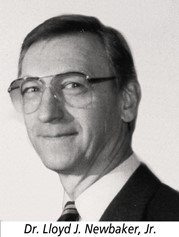