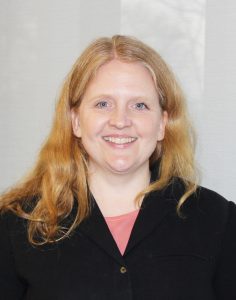 NJSBA’s staff has seen several transitions recently as the Association welcomed one staff member, and bid farewell to another.

She has a Bachelor of Science in Law and Justice from The College of New Jersey and holds a Juris Doctor degree from the Widener University School of Law.

As a member of NJSBA’s legal staff, Asher will be involved in answering legal queries from board members, helping to write amicus briefs, conducting training courses, and updating boards and board members on various legal matters.

Barbara Deveney Retiring Barbara Deveney, a veteran of 30 years of service at the New Jersey School Boards Association, will retire on Dec. 29, 2018. Deveney, the administrative assistant to NJSBA General Counsel Cyndy Jahn, is known to many members for her involvement in helping to organize the twice-yearly Delegate Assembly. Over the years she has also been a staff member in the executive office and the legal department.

“We are grateful for the hard work and diligence that Barbara has displayed in fulfilling her assignments at NJSBA and feel lucky to have had her as an employee,” said Dr. Lawrence S. Feinsod, NJSBA executive director. “She will be missed by all of us, and on behalf of the officers, staff and membership of NJSBA I want to wish her health and happiness in retirement. “