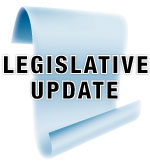 On Thursday, Dec. 17, the Senate and General Assembly held their final scheduled voting sessions of 2015. The Legislature will return in the new year to finish up the 2014-2015 legislative session on Monday, Jan. 11. The 2016-2017 session begins on Tuesday, Jan. 12 when the Legislature reorganizes and the governor delivers the State of the State address. The following provides a breakdown of recent legislative activity impacting New Jersey’s school districts and students.

The General Assembly approved A-2893/S-1940, which exempts payments for electric, gas, telecommunications, water, and sewer utility services provided by companies under the jurisdiction of the Board of Public Utilities (BPU) from school district and local government certification requirements related to payments for goods and services with public money. An exemption from these certification requirements may provide savings for taxpayers that may be used to fund school districts and local government entities, and may save money for public utility ratepayers throughout the state. The NJSBA supports the measure. The bill now heads to the governor for his consideration.

The Senate gave final legislative approval to A-2583, which requires the commissioner of education to develop a fact sheet that provides information about bedbugs. If the bill is enacted, the fact sheet will be posted on the New Jersey Department of Education’s website. Beginning with the 2016-2017 school year, each school district may distribute the fact sheet to students and their parents or guardians. The NJSBA supports the measure.

On Dec. 17 the full Senate unanimously approved S-2727, which establishes a 16-member Task Force on School District Regionalization to study and evaluate issues associated with school district regionalization. If S-2727 becomes law, the task force will be required to issue a final report to the governor and the Legislature within six months of its organization. The report will contain the task force’s findings and recommendations regarding possible incentives for the establishment of new regional school districts and the elimination of impediments to the creation of regional districts. The NJSBA will have a representative on the task force and supports the legislation. The bill’s Assembly counterpart has yet to be posted for committee consideration.

A measure that would require a daily recess period for students in grades kindergarten through 5 moved one step closer to the governor’s desk on Dec. 17. Approved by the full Assembly, S-1594/A-4044 requires that a public school district must provide a daily recess period of at least 20 minutes for students in grades kindergarten through 5. The recess period is to be held outdoors, if feasible. Under the bill, a student may not be denied recess for any reason, except as a consequence of a violation of the district’s code of student conduct, including a harassment, intimidation, or bullying (HIB) investigation, but a student may not be denied recess more than twice per week. The bill’s provisions would not prohibit school staff from denying recess based on medical advice or a student’s 504 plan; additionally, a school district would not be required to provide a recess period on a substantially shortened school day. The bill also provides that recess will not be permitted to be used to meet the current statutory requirements regarding the provision of health, safety, and physical education courses in public schools, as set forth in state law.

Although supportive of the sponsors’ intention, NJSBA believes that decisions on implementing daily recess should be made at the local school board level. During the legislative process, the Association also pointed out that certain circumstances, such as the ability to provide outdoor recess, vary among school districts. NJSBA secured an amendment that would not require outdoor recess if it is not feasible due to a school’s surrounding environment or other factors.

The bill now returns to the Senate, which passed a previous version of the bill, to concur with changes made in the Assembly. If signed into law, the recess requirement will go into effect at the beginning of the 2016-2017 school year.

On Monday, Dec. 21, the Senate Budget and Appropriations Committee releasedA-1455/S-2011. Designated “Abigail’s Law,” this legislation requires that all newly-manufactured school buses be equipped with sensors to alert a bus driver when a child walks in front or back of the bus. The measure has already passed the Assembly and is now primed for a Senate floor vote. If approved by the Senate and the governor, the bill would go into effect 180 days after enactment, but it would only apply prospectively. Therefore, buses already in operation would not need to be retrofitted with new sensors. NJSBA has a long-standing policy endorsing the installation of bumper sensors on school buses, and therefore supports the measure. While acknowledging that the prospective nature of the bill should mitigate the adverse financial impact on school districts, the NJSBA did urge the Legislature to provide a funding source to offset the cost of installing the sensors.

The Senate Environment and Energy Committee released A-2687, which provides for the replacement of incandescent light bulbs in public school buildings with energy-efficient light bulbs. The bill was referred to the Senate Budget and Appropriations committee for further consideration. The full General Assembly approved the measure earlier this year.

The Assembly Judiciary Committee approved Assembly Concurrent Resolution No. 3. ACR-3 proposes a constitutional amendment to require the state to make its payment to the pension systems for public employees each year and to establish in the Constitution the rights of public employees vested in these pension systems to receive earned pension benefits. The state would have until July 1, 2021 to start making each year’s pension payment in full. Until then, the state would make a partial, but increasing, payment each year. The payment would be made on a quarterly basis. The proposed constitutional amendment will be submitted to the electorate if it is approved by three-fifths of the total membership of each house of the Legislature this session, or if it receives a majority in each house in two successive years. An identical resolution, SCR-184, is pending in the Senate.