2019 was another successful year for the STEAM Tank Challenge, sponsored by the New Jersey School Boards Association (NJSBA) and the U.S. Army.

The application deadline for the upcoming 2020 STEAM Tank Challenge has been extended to Jan. 24, 2020. The applications are available here.

The 2019 winning teams—nine in all—were introduced during a ceremony at the annual NJEA Convention, with education leaders from across the state honoring the students for their creativity and achievement.

The continued growth of the STEAM Tank Challenge has been phenomenal.

In the first year of the contest, in 2016, there were 32 submissions with 17 teams selected to present their ideas and inventions at NJSBA’s Workshop conference in Atlantic City. This year, more than 550 teams applied, and 90 teams made it to the finals.

Teams were asked to identify a real world problem or situation that needs resolution, or modify an existing product to make it better, or invent something that does not exist yet.

Photos of the student winners appear below:

Casey, Madison, and Reese invented an expandable dress shoe for children, called “Stretchers.” They worked with the shoe company, Skechers, to create their prototype.

Winning first place for their project “Stretchers,” from left to right, are Casey Reinknecht, Madison Vigliotti, and Reese Ertel of the Aldrich Elementary School in Howell, Monmouth County.

The invention — “The Writer Lighter,” a pen with a light, could help a soldier without access to electricity or a person whose home lost power. 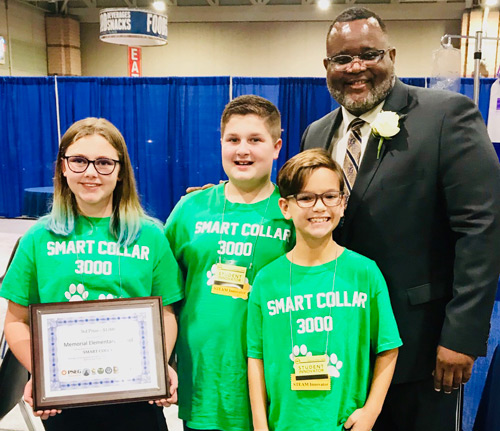 The team invented “Smart Collar 3000” to help bring home lost pets. They are being congratulated for their work  by New Jersey Education Commissioner Lamont Repollet. 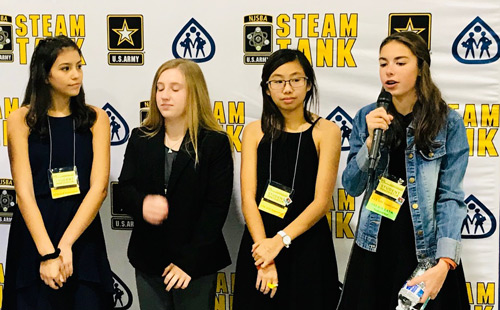 The winning project, called “Cell Cycle” was a mobile game innovation that provides an incentive to recycle.

The team created a prototype for an x-ray machine to conduct locker checks for possible active threat situations. Their project was called “Locker Safety.” 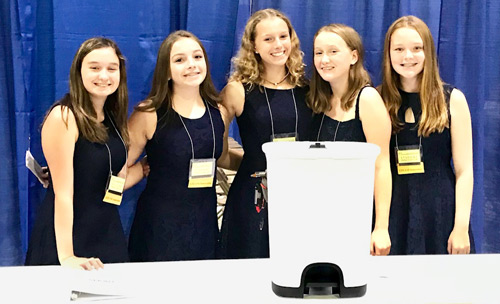 The Howell Middle School South team pose with “Smarty T,” a trash can which uses sensory technology to improve recycling. 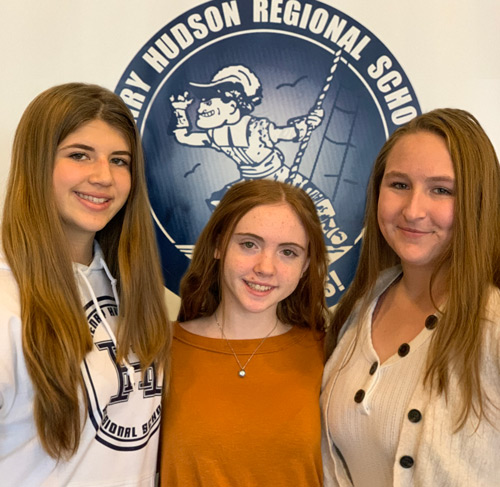 The Henry Hudson Regional High School team captured first place for their project called “Puppyable.” They made edible dog toys to prevent dogs from getting ill and needing surgery after swallowing indigestible products. 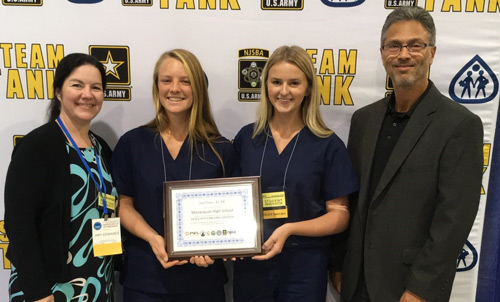 The “EcoCast Chilling System” is an extension of the team’s earlier second-place invention, EcoCast.  EcoCast was a biodegradable, 3D–printed, multilayered cast for compound fractures. However, one aspect of post-surgical care that EcoCast did not address was the change in swelling of an injured limb post-surgery.  Current methods of stabilizing broken limbs, post-surgery, restrict the application of ice or cold compresses to the site. The team’s solution to this problem extended the design of the 3D-printed EcoCast to include an integrated fluid chilling system via a unique manifold control system. This allows for compensation in limb swelling, application of cold compresses where they are needed most, and decreased patient pain, all of which will help people return to daily activities sooner.

Third place was claimed by five senior students in the Electrical and Computer Engineering Technology (ECET) program.  Poor video quality of street cameras makes it more difficult for law enforcement in criminal investigations to process the recorded video when analyzing a crime. While law enforcement personnel are provided with the latest in video-analyzing software, extracted data is often inadmissible in court due to inconsistencies in camera frame rates. Frame rate is imperative in gauging the time it takes for a vehicle to travel a certain distance between frames in a recorded video. Middlesex County Academy for Science, Mathematics and Engineering Technologies was approached by a mobile forensics detective from the Middlesex County Prosecutor Office, detective Brandon Epstein, to implement a solution. The students designedthe product with the help of their instructor. This innovation has been named the Frame Rate Authenticating Tool, (FRAT). Detective Epstein successfully field-tested the FRAT innovation in three official cases. One of the cases resulted in a trial.