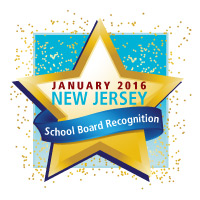 As part of School Board Recognition Month, the New Jersey State Board of Education approved a resolution on Jan. 7 that commends the work that the state’s 4,800 local school board members provide to improve the education of nearly 1.4 million school children

NJSBA President Don Webster Jr. accepted the resolution, thanking the State Board for its support for local boards, and noting that, over the years, many State Board members have served on their local boards of education, gaining experience in education at the local level before rising to the state level. An example, noted Webster, is Joseph Fisicaro, current State Board vice president, who served on the Lenape Regional board.

“Local school board members, who serve without compensation, represent the community by ensuring tax dollars are spent wisely, and by setting academic goals for their school districts,” said Webster. “Their work has a positive impact on the classroom.  They’ve helped make New Jersey a national leader in student achievement.”

NJSBA has posted information online to help communities honor their school board members; the School Board Recognition Month resources are available at www.njsba.org/recognition.

The State Board of Education’s resolution states: