On Monday, June 19, Kimberley Harrington was formally confirmed by the full state Senate to become the Commissioner of the New Jersey Department of Education (NJDOE). Harrington had been serving in acting capacity since last September, following then-Commissioner David Hespe’s resignation from the department. The vote to confirm her as commissioner was unanimous.

Prior to being named acting commissioner, Ms. Harrington served as assistant commissioner/chief academic officer for the NJDOE. She is also a former classroom teacher and school administrator who has more than 20 years of experience implementing academic programs and working directly with students and parents.

When Harrington was interviewed by the Senate Judiciary Committee last Thursday, Dr. Lawrence S. Feinsod, NJSBA executive director of the New Jersey School Boards Association, lent his support for her nomination. “She is an education leader dedicated to a singular goal: Enabling New Jersey’s nearly 1.4 million public school students to grow and excel, so they can be prepared for college and careers,” wrote Dr. Feinsod in a letter to Judiciary Chair Senator Nicholas Scutari. “I am not only impressed by her unwavering commitment to high-quality education for every child, but also by her strong vision for how our public schools should accomplish that goal.”

The NJSBA congratulates Commissioner Harrington on her confirmation and looks forward to continuing to work with her toward our mutual goal of advancing the achievement of our state’s public school students. 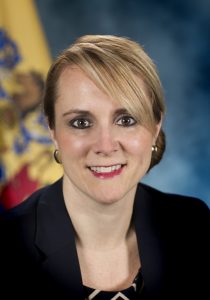