Isobel Costello is a senior at Newton High School in Sussex County. Since her freshman year in high school, she has been running the Weekend Bag Program, which provides food and toiletries for needy students. In this short video interview, she talks about the program with Ray Pinney, the NJSBA’s director of member engagement.

Isobel, 17, sends home bags of weekend food and hygiene items with more than a hundred elementary and middle schoolers in need at seven Sussex County schools, providing more than 10,000 meals last year alone. In the fall of 2016, when she was a freshman, Isobel heard kids at school talking about not having food or basic items on the weekends, when they didn’t have access to free meals at school.

“The issue of juvenile food insufficiency is important because it is extremely hard to educate a student with an empty stomach who is not comfortable or focused enough to learn,” she said.

With help from her mother and sisters and permission from her school district, Isobel started providing 10 children with food bags filled with items that she and her family shopped for and then packed at home. As more children were identified by a school liaison, it became clear that she needed help. So she formed a nonprofit called “The Weekend Bag Program Inc.,” recruited student and adult volunteers to join her, and found a permanent space to store and pack food bags. She also established relationships with churches, scout troops, 4-H clubs and community organizations to help collect donations and raise money. On average, Isobel spends about 15 hours a week on her project. After she and fellow volunteers pack the bags, she delivers them to the schools participating in the program, which then distribute them anonymously to children who might otherwise go hungry. 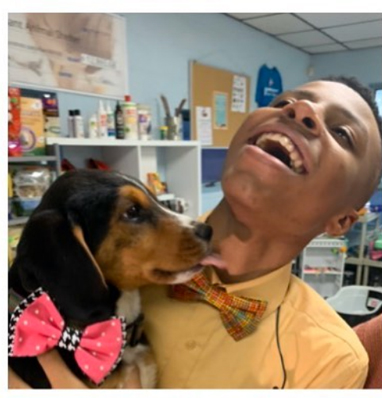 Darius Brown is a seventh-grader at Newark North Star Academy. Darius has helped hundreds of dogs find loving homes by making stylish bow ties for them, donating these handmade creations to animal shelters across the country and in the United Kingdom, and promoting dressed-up dogs on his social media accounts.

When he was eight, Darius, who was born with speech, fine motor skills and comprehension delay, began working to develop his motor skills by cutting fabric for the hair bows his older sister was making. “I discovered my love for fashion and started making bow ties for myself,” he said. Then, after he heard about all the dogs that were displaced and sent to shelters in the wake of Hurricanes Harvey and Irma in 2017, “I decided to use my passion for making bow ties to help dogs look cute and dapper” so that they are more likely to be adopted, he said.

Darius began making canine bow ties and donating them to an ASPCA shelter. He also posted pictures of shelter dogs wearing his bow ties on his Instagram page, which now has more than 50,000 followers. As his project expanded, he founded an initiative called “Beaux & Paws,” raised funds online to cover expenses, and started shipping his bow ties to animal shelters all over the country. Darius also has visited shelters in six states to help with adoption events. He figures his efforts have made it possible to find permanent homes for hundreds of dogs that might otherwise have been euthanized.

“Animals should not be treated any less than humans,” he said. “We all deserve to live a good life and be happy and loved.”