During the past year, board of education negotiations team members found themselves thrown into a bargaining environment like no other, which began last March with the pandemic and unfortunately continues today.

In this atmosphere of uncertainty and upheaval, many districts paused negotiations for weeks or even months as they learned how to navigate new meeting platforms, while the board and union negotiating teams engaged in active discussions, in separate places, for the first time ever, as opposed to sitting in one room around the same table.

Once many districts resumed contract talks, a great number opted to settle quickly. In many cases, districts agreed to a one-year agreement for salary only, realizing the other challenges that lie ahead for the districts due to COVID-19, much of which had nothing to do with contract negotiations. The one-year agreements will also buy some time to assess fiscal uncertainties, such as the impact of the new healthcare law (Chapter 44), rather than committing to a contract that would span several years.

The NJSBA is releasing its latest report on teacher contract trends today.

The report shows that the desire to settle quickly, and for shorter terms, also affected the number of districts that typically head to mediation and fact-finding. An eight-year average spanning from 2011 to 2019, according to information obtained through surveys to school districts, shows approximately 60% were able to settle their teacher’s collective bargaining agreement without declaring an impasse. In 2019-2020, that average climbed to 79% of districts settling without the help of a neutral third party. The 2020-2021 numbers are still pending.

At this time, there are far fewer districts using impasse procedures than is typical for this time of the year. However, it is important to remember 2020-2021 was unique and the trend of a quick settlement may quickly become a distant memory as negotiating teams head back to the table.

Settlement Rates The reported teacher’s settlement rates for the 2020-2021 year have averaged 3.08%, as reported to NJSBA through surveys to school districts. In comparison, last year the 2019-2020 average was 3.02%. A preliminary look at 2021-2022 shows settlement rates remaining relatively level at 3.10%.

However, teacher’s contracts that will begin with the 2021-2022 school year, in most cases, are still in the preparation stage, or negotiations are just getting underway. The NJSBA negotiations survey to the more than 230 school districts where teacher contracts will be expiring this year is going out to school business administrators in May and preliminary results of those newly reached 2021-2022 settlements will be available in early June.

One Year Agreements   Historically, the majority of teacher’s contracts cover three years with very few one-year agreements.  The average settlement rates reported for one-year contracts are averaging 2.91%, based upon 26 ratified settlements for 2020-2021.  Interestingly, if you remove those one-year settlements from the overall average, those who settled for two years or more, the average increase for 2020-2021 is 3.15%.

The NJSBA survey shows one-year agreements generally offer lower settlement rates.  However, that often comes from not obtaining a union concession or achieving a goal of the board.  Many of those one-year settlements reached an agreement for a salary increase only, perhaps putting off many of their proposals for future negotiations.

It’s unclear whether the trend of one-year agreements will continue, as many districts noted in their survey responses that they anticipated negotiating a longer agreement in their next round of negotiations.  The future remains uncertain, however, because there is still an active pandemic, there are still questions about the fiscal impacts of Chapter 44, and there are still budget uncertainties, all of which could have an impact going into the new round of contract talks. 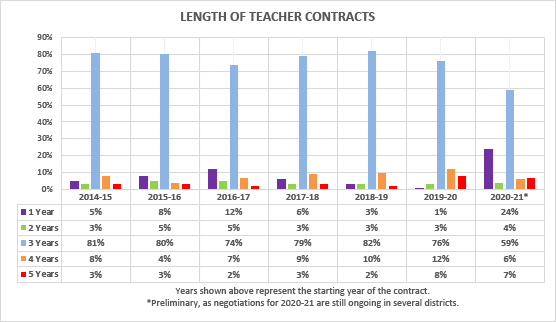