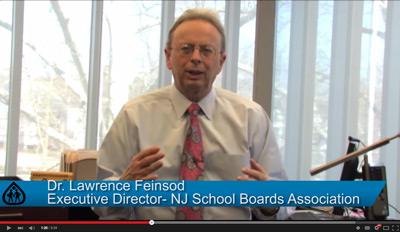 An investment in our children. The ability to make a decision and make a difference. The best unpaid job there is – next to motherhood.

These are some of the ways New Jersey school board members describe their service to their local school boards, in a new video created and posted on YouTube by the New Jersey School Boards Association.

The video, called “New Jersey School Board Members: Putting Children First,” was produced by NJSBA to help make the public aware of the role played by local school board members. Creation of the video also ties in with NJSBA’s 2015-2017 Strategic Plan.

Featuring interviews with numerous board members, and NJSBA Executive Director Dr. Lawrence S. Feinsod, the video explains the role of the state’s nearly 5,000 board members, all of whom serve as volunteers. Board members serve because they are dedicated to increasing student achievement and making a difference for New Jersey’s roughly 1.38 million school children.

NJSBA provides training, guidance and information to help board members in their role.

“There is no other elected official in the state of New Jersey that can have such a dramatic influence on humanity as that of a board member,” explained Dr. Feinsod in the video.

The state’s board members agree.

“There is no more rewarding volunteer job than giving back to kids and education,” commented Washington Township (Gloucester County) Board Member Ginny Murphy, in the video.

Carlstadt Board Member Bruce Young, also quoted in the video, echoed the thought.

“I would recommend it to anybody who really has the heart and the drive to be part of education for our kids,” he said.

To find the video online, visit NJSBA’s webpage, or https://youtu.be/dHg4bLv0WZc