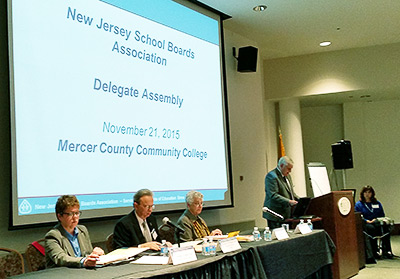 The measure, introduced by the Highland Park Board of Education, was the only resolution to come before the delegates at the session, which took place at the Conference Center at Mercer, Mercer County College. It passed by a vote of 133-1.

Nineteen counties were represented at the Delegate Assembly.

NJSBA Executive Director Dr. Lawrence S. Feinsod updated delegates with a report touting NJSBA successes in areas such as sustainability, STEAM education, and service to local boards and counties. He also advanced NJSBA efforts to come, including plans for increased advocacy; the start of a new task force analyzing the state’s accountability regulations; and the upcoming launch of a new NJSBA website.

NJSBA President Don Webster opened the meeting, calling first for a moment of silence in solidarity with those who suffered recent terror attacks in France and Mali. Following that, he spoke of the need for community support for schools, and commended board members for their commitment.

“I’m certain you’ve heard the proverb, ‘It takes a whole village to raise a child.’ Well, it also takes an entire community to educate a child,” Webster said.

During the business portion of the meeting, Highland Park delegate Darci Cimarusti introduced her board’s resolution. It refers to language in the state’s fiscal year 2016 budget, which the Office of Legislative Services calculated would increase districts’ payments to charter schools even though districts’ own state aid was held flat.

The resolution called for NJSBA to adopt the following policy language:

“The NJSBA believes that any changes to charter school funding made by the State should be fully funded by the State directly to the charter.”

“No matter what your position on charters, this resolution is about parity and equity,” Cimarusti said, citing factors that pose financial difficulties for school districts, including the 2 percent tax levy cap, flat funding and changes in enrollment.

Policy adopted by the Delegate Assembly determines the position that NJSBA will take on issues before the state legislature.