New Jersey’s public schools and districts have always been governed by extensive regulation, for they bear responsibility for one of the most important jobs in the public sector – educating and maintaining the daily safety and well-being of the state’s 1.4 million public schoolchildren.

Thousands of pages of statute and administrative code guide New Jersey’s roughly 580 public school districts, covering everything from fiscal operations to facilities, and from school board member training to travel. Included among the myriad regulations are those that were enacted to implement the School District Accountability Act, which was signed into law in 2007.

All school finance rules, including the Commissioner Accountability Regulations, are now included in one administrative chapter, N.J.A.C. 6A:23A.

While created to promote public school efficiency and address alleged fiscal abuse in some New Jersey school districts, the Accountability Regulations have led to what some consider an unwarranted burden placed on school districts, requiring excessive administrative work and cost, with negligible benefit to public education.

In the words of several New Jersey school officials, who responded to a survey on the regulations conducted by the New Jersey School Boards Association’s Accountability Regulations Task Force as part of its review, various provisions of the regulations were described as follows:

Task Force Formed The regulations were due to sunset in November 2016 (although that date has since been extended to May 2017), and were expected to be reissued. In anticipation of that, NJSBA’s Task Force on New Jersey’s Accountability Regulations was established by NJSBA Executive Director Dr. Lawrence S. Feinsod in the fall of 2015, with its first meeting held on Nov. 19, 2015. The task force included local school board members; resource persons representing the state’s executive county school business administrators and the New Jersey Association of School Business Officials; local school district administrators; and NJSBA staff members. It was chaired by Michael Kaelber, NJSBA director of legal and labor relations services. See the sidebar at right for a full listing of members.

“Our goal is to make sure that the new regulations promote responsible action and accountability, but do not handcuff school boards and their administrative staffs with red tape, restrictions and additional expense,” explained Dr. Lawrence S. Feinsod.

The task force was charged with the following activities:

For each regulation, the task force used an analysis template that included a review of the following, relevant to each section:

The task force also considered, as part of its deliberations, the NJSBA Final Report on the Study of the Impact of the Salary Cap on Chief School Administrators, issued in 2014 and the Leadership for Educational Excellence (LEE) Commentary on the Accountability Regulations.

Survey Taken As a major piece of its research, the task force also conducted an online survey of local school board presidents, superintendents and school business administrators, gathering their input on a dozen of the most prominent and oft-discussed regulations. During the three-week period of collecting responses, from March 17 to April 8, 2016, a total of 274 responses were received. This number represents input from nearly 40 percent of the state’s public school districts. The results of this survey, which are included as appendice C in the final report, informed the task force’s decision making.

The Deliberative Process Throughout its review, the task force used a series of basic principles in deliberation. Those principles include:

The NJSBA Task Force on New Jersey’s Accountability Regulations met on nine occasions, from Nov. 19, 2015 through June 15, 2016. Each meeting was held at NJSBA headquarters in Trenton.

Major highlights of the task force’s recommendations include:

The chief school administrator salary cap establishes maximum salaries based on district enrollment, with stipends and bonuses allowed in some situations. This highly-publicized “cap within a cap” has increased CSA turnover, leading to a lack of continuity of school district leadership at a crucial time in public education. The task force believes school boards should have the flexibility within the state’s 2 percent tax levy cap, to spend as they feel it is appropriate.

In the survey conducted by the Accountability Regulations Task Force, the CSA salary cap prompted the strongest single reaction – 68.6 percent of 274 respondents said it is “detrimental or somewhat detrimental,” while 10.6 percent deemed it “beneficial or somewhat beneficial.” An additional 20.8 percent said it had no impact, or responded “don’t know.” This question also prompted 133 comments, the largest number of comments received on any single question in the survey.

The task force recommended that the CSA salary cap be eliminated.

2. Additional measures to ensure effective and efficient expenditure of funds: public relations and professional services, plus expenditures for meals and refreshments

The restriction on school district and charter school expenditures for certain activities, such as meals and refreshments for employees at district events, prompted significant reaction among participants in the task force survey. More than 50 percent of respondents to the survey said the regulation pertaining to meals and refreshments is detrimental or somewhat detrimental, and that barring these activities wholesale has a negative effect on morale and positive school culture.

The state’s 2 percent tax levy cap on school spending already requires deliberate review of all such costs, in order to maintain effective and efficient expenditure of school funds, so this section is largely unnecessary. The task force recommended the regulations allow for reasonable expenditures for staff recognition at events such as a back-to-school luncheon.

School boards are required to have policies and procedures in place pertaining to employees’ and school board members’ travel for purposes of professional development. Yet, while both district employees’ and board members’ goals are to further the quality of education in a district, the two groups are treated differently in terms of travel. The task force recommends that expenditures for travel and professional development be treated the same for board members as for employees, such that an annual dollar amount be set for travel and professional development for which additional board approval is not required. The task force also recommended that regulations be revised to permit post-event approval for board member attendance at conferences, training events and programs; and that the prohibition on reimbursement for overnight travel, for trips of less than 50 miles, be eliminated.

6. Tuition for public schools and for private schools for children with disabilities

The task force considered separately the questions of establishing tuition rates and increases for public schools, such as vocational-technical technical schools and county special services schools; and for private schools for students with disabilities. In both cases, the task force recommended that tuition increases should have an annual cap equal to the tax levy cap of the sending school district. In the case of public schools, the task force also recommended that local districts should not be required to pay tuition to vocational-technical schools whose programs duplicate the local school district’s, and that the average daily enrollment should reflect the actual practice of calculating that enrollment.

The NJSBA Accountability Regulations Task Force report contains, in all, 67 separate recommendations, all of which are important in that they affect the efficient and productive operation of the state’s public schools. The remainder of the recommendations of the NJSBA Accountability Regulations Task Force may be found in the report, which is posted in its entirety on the NJSBA website.

In the fall of 2016, the report’s analysis and recommendations were shared with the president of the State Board of Education and the Commissioner of Education.

On the salary cap, the proposed regulations would adjust salary maximums, allow for “retention” increases, and make other changes to the cap process.

Significantly, it would also allow districts to increase the salaries of superintendents who are at maximum and who accept new contracts by 2 percent for each year of the new agreement.

NJSBA released a statement shortly after proposed revisions to the salary cap were issued, that restated the Association’s position on the caps. “While we appreciate movement on this issue, we are disappointed that the salary cap concept would remain in effect,” said Dr. Lawrence S. Feinsod, NJSBA executive director. “The compensation package for the district’s chief education officer should be the purview of the local school board, which is responsible for the local governance of public education.”

At School Leader press time, the NJDOE was conducting public hearings on the proposed regulations.

The Accountability Regulations, N.J.A.C. 23A, were scheduled to sunset on Nov. 25, 2016. However, by virtue of the filing of the proposed revisions on Nov. 16, the current regulations will remain in effect for an additional 180 days and will sunset on May 24, 2017.

As permitted under a 2008 statute, the commissioner of education, rather than the State Board of Education, has authority to readopt sections one through 15 of the regulations, including the superintendent salary cap.

NJSBA will keep members updated on the proposed regulations in its weekly online newsletter, School Board Notes. 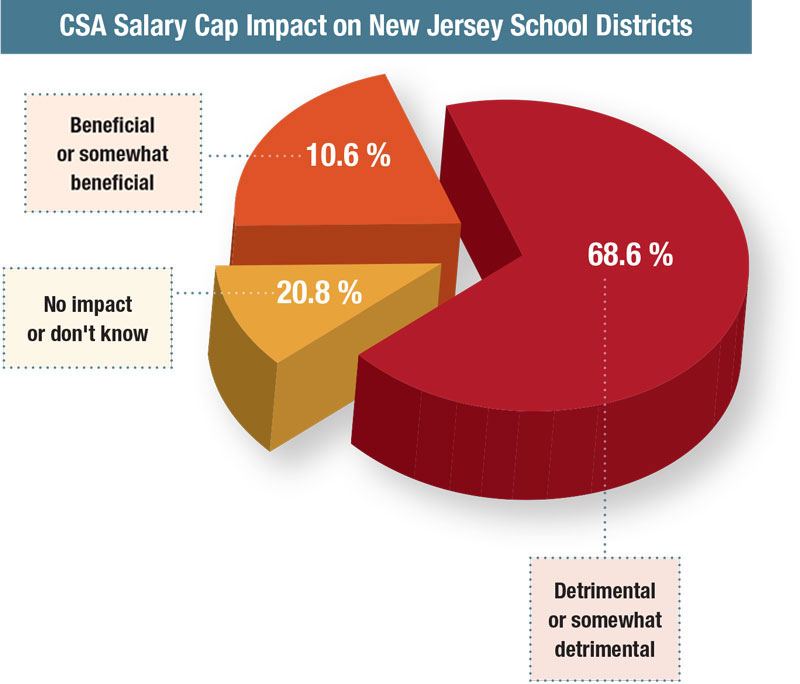 Members of the
Task Force on New Jersey’s Accountability Regulations