On May 18, Mike McClure took the oath of office for a two-year term as the 50th president of the New Jersey School Boards Association.

McClure, a member of the Maple Shade Board of Education since 1999, is no stranger to NJSBA service. He has been the Association’s vice president for finance for the past four years, and has spent eight years on the NJSBA Board of Directors, as well as two years as an alternate representative to the board of directors. He has served on several NJSBA committees, including facilities needs and assessment; audit; finance, nominating; and as the Association’s NJSIAA representative. He is also a trustee of the Educational Leadership Foundation of New Jersey. At the national level, McClure has been a member of the National School Boards Association’s nominating committee.

“We are fortunate to have Mike as our president because of his incredible dedication to public education,” said Dr. Lawrence S. Feinsod, NJSBA executive director. “Children are at the center of his decision-making. Whenever we discuss the educational landscape, he always steers the conversation back to what is best for kids.”

“From his work as a corporate manager and as the president of the Maple Shade Board of Education, he knows how organizations work and understands the complexities of public education,” said Feinsod. “He has been an amazing contributor to NJSBA as a vice president for the past four years, so his ascension to the presidency has been a very natural event. To say that he is prepared for this new role would be an understatement.”

McClure has three grown children, a daughter and two sons, all of whom are Maple Shade alumni, and four grandchildren. Two of the grandchildren currently attend Maple Shade public schools — a grandson who will begin high school in September, and a granddaughter who will be in fifth grade next year.

The Maple Shade school district, in Burlington County is a pre-K-12 district that serves about 2,200 students. There are four schools; currently, one serves pre-K-grade 2; another for grades three and four; a grades five and six school; and a secondary school that includes grades seven through 12.

Recently, School Leader spoke with McClure about his school board service, the challenges that districts in New Jersey are facing, and other topics. Below are excerpts from that conversation.

How did you decide to get involved in the board of education?

I got involved for a couple of reasons. I spent years coaching just about every youth sport in my town — football, soccer, baseball, and softball. I helped start the youth wrestling program and ran it for 15 years. At some point, I wanted to give up the coaching but I still wanted to be involved with helping children, so I thought I’d get involved in education.

It was also a good time for that — all of my children were out of school. I did not want to be on the school board with my children in school. I felt like there would be a conflict, so I waited until my youngest son left the high school, and that’s when I became a board member.

I was also encouraged by people in town — one of the school principals encouraged me, and some members of town council encouraged me. I was the president of the Advisory Board of Recreation for 15 years, so I knew the people on town council.

Your district passed a referendum in December 2018. Tell us a little bit about it.

The referendum was for about $50 million ($49.7 million), and there will be repairs and improvements at all four schools as well as the central office. There will be security vestibules and upgrades at the schools; a nine-classroom addition at one of the elementary schools; renovations to the science labs, several classrooms and the weight room at the high school; and air-conditioning and electrical and plumbing improvements at several schools. We are expanding the preschool program, so we will be realigning an elementary school as a Pre-K-1 school and another as a school for grades two through four. We are also adding another gymnasium to the high school. It’s not only for our students in grades seven and eight, but it will accommodate the township’s recreational programs. We are a small town, full of friendly people and the community uses our facilities seven days a week. We did not have enough auxiliary gym space to handle all the activities that go on.

This is the second referendum we have passed since I’ve been on the board. In 2004, we passed a $29 million referendum.

What accomplishments are you most proud of in your time on the board?

I’m proud of having passed the referendums, of course. But I am also proud of the fact that a few years ago, we started autism programs in two of our schools. We felt like the bus ride to Burlington County Special Services was long for the students — about 45 minutes, and we wanted to bring them back in-district. It ended up being a cost-savings for us as well.

And I think one of my big accomplishments through the years has been prioritizing to keep class size low. That was one of my concerns when I joined the board — I felt class sizes were getting too big.

What committees have you served on at the Maple Shade board?

I have served on just about every committee. I chaired several, including the facilities committee, finance, personnel, and curriculum. I am president now, but I would definitely welcome someone else to step up if they wanted to. I believe everyone should have a seat at the head of the table at some point, so they can learn the full function of the board. Believe me, when you are board president, you quickly learn all kinds of things.

What are some of the challenges that the Maple Shade district is dealing with?

The district has changed since I’ve been on the board. When I started, probably about 10% to 12% of students qualified for free and reduced-price lunches. Today, 44% of our students qualify for free and reduced-price lunch. It has been a challenge promoting equity and diversity within the school district, and I think we have done a good job over the years.

We have an award every year for our high school graduates. We typically graduate between 110 and 140 students, and we give scholastic awards to students who have a 3.5 grade point average or better. Many of these students are also our student leaders who assist in the community. This year 35 children out of 134 graduates were honored. I use that as a benchmark and I think we’re doing something right.

The biggest challenge is dealing with school district finances, and trying not to put too much of a burden on people. We are a blue-collar town and it’s tough for residents. We don’t want to tax people out of the place they live.

How has board service changed since you began?

I would say that I really see a difference between now and 1999 in the number of restrictions that are put on boards, between the ethics and other restrictions. We are still able to be a policymaking body, but we are more limited.

What issues do you think New Jersey boards of education will be facing in the near future?

I think school finance will be the biggest issue, for two reasons. First, because of state funding and the need to fund the formula. Also the cost of special education is going to continue to be a problem.

It is out of control. One year, we had a family come into the district in the middle of the year, and the increased cost to our district was more than $500,000 in one year. When you haven’t budgeted for that and you can only have a minimal amount of surplus, it is extremely difficult to maintain your finances.
I think we need to have regulations and balance on special education costs, so that the kids get the education they need, and it is fair and equitable to the district.

We have had good experiences with bringing children back in-district, as well as keeping students in-district throughout their educational career. We have an elementary school student now who is wheelchair bound, and cannot speak. He communicates through a device, and has a one-on-one aide all day. It’s inclusive and he is getting a good education. There was a presentation to the board about how the class had a day where the teacher and the whole class did not speak all day, and had to communicate in other ways. It was awesome — the kids loved it, the student loved it and the teachers loved it.

What do our schools generally need to do to prepare students to live and work in the 21st century?

We have to teach them to be self-sufficient. I like what we are trying to do now, in making students “think.” In our day we memorized everything, but now we try to get them to more actively reason and think, so they are not just pushing some buttons to get the answers.

That’s the challenge — they have to be ready to make tough decisions out there and that’s what we are trying to get them ready to do.

You have earned the NJSBA Certified Board Leader designation, so you have taken a lot of training courses over the years. Which do you think have been most valuable?

I have taken just about every course NJSBA offers. But one of the best things I learned was how to do a scattergram for figuring a salary guide during negotiations with our unions. I remember it was a whole-day class — or nearly all day- but it was great. It gives you so much information. I remember presenting a salary guide to one of the union reps, and saying, ‘this is what we’re going to work from.’” I think that all board members should take negotiations classes — that is one of the biggest things you will do as a board member and that is a skill set that needs to be taught.

Tell us a little bit about your professional background and your career.

I spent six years in the U.S. Navy in the Seabees, was a mechanic, and served during the Vietnam War. When I came out of the military, I went to work as a truck mechanic. Over the years I moved up the ladder, starting as a fleet mechanic, then managing the mechanic shops. I am now assistant corporate fleet manager for a transportation company, and I oversee more than 2,000 vehicles in 25 locations, as well as a multi-million dollar budget.

What hobbies do you have?

For years I was a dirt track racer, racing modified dirt cars. Then I became a microsprint driver; my brother and I were partners in a URC (United Racing Club) sprint car. We did the sprint car tour for about five or six years, and then I got out of everything about three or four years ago. But we still go to races. This summer my brother and I are planning to go see races every weekend and tour the dirt tracks up in New York state.
We are also avid campers. For years my wife and I camped with the children in tents, then we moved to a pop-up camper, now we have a tag-along trailer. We go out camping about four times a year, all over the place. One of our best times with the children was when I took 35 days off and we traveled and camped across the U.S. We drove 5700 miles in 37 days. My children have been in 38 states!

What are your plans for NJSBA?

I think NJSBA does a great job, and I think we want to continue that, and work towards always becoming better in serving boards, training board members and advocating on behalf of all of our students. 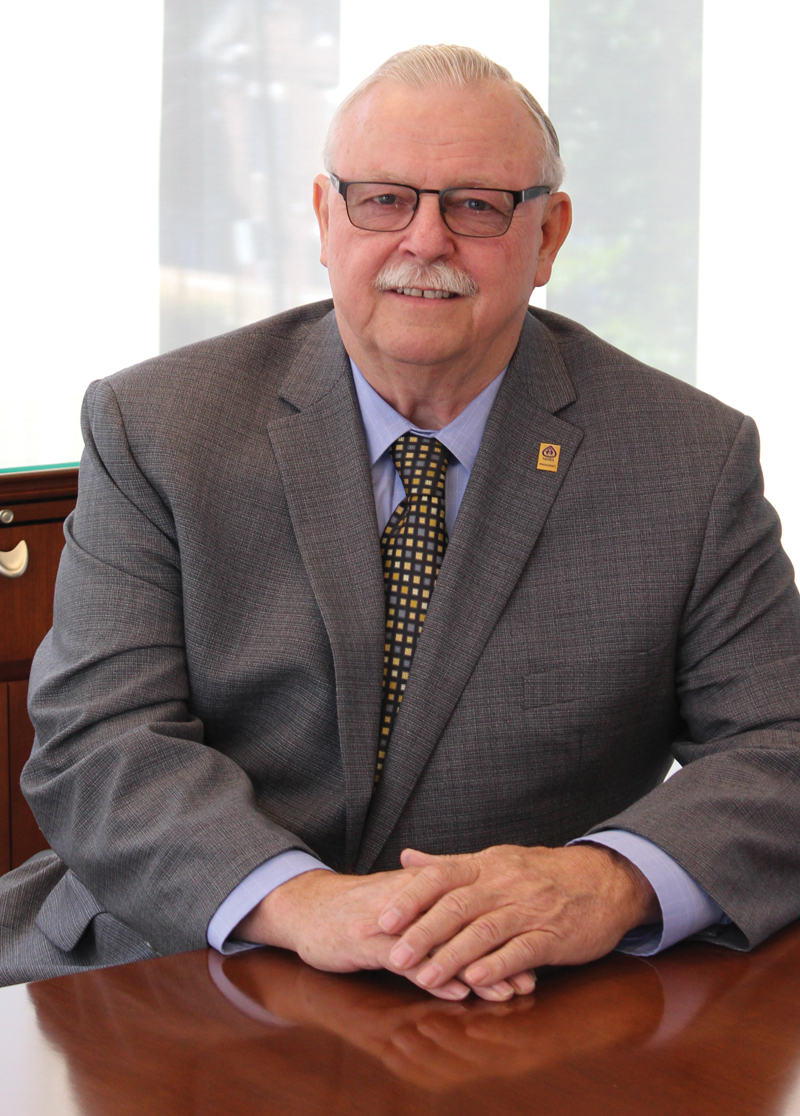