For high school football players, the number of reported concussions is up.

The number of high school students playing the game in New Jersey fell 16.6 percent since the 2008-2009 academic year, when 27,623 students played the game. Today, there are 4,589 fewer players on the field.

One reason may be the concern over the injuries that football players sustain — particularly head injuries.

That’s why, in February, the NJSIAA took extraordinary action to protect its student athletes.

Hitting during football practice will now be sharply cut back, from 90 minutes per week to 15, the NJSIAA announced on Feb. 13. Pre-season full contact will be reduced from unlimited to six hours total. The existing complete ban on full contact for football players during the spring and summer will remain in place.

In all likelihood, the number of concussions hasn’t increased, but football coaches are more aware of how serious repeated blows to the head can be, especially for teenagers whose brains are still developing.

White said that every coach, in every school sport in New Jersey, is required to undergo concussion training.

“It’s a very good thing to try and limit the contact, because much of the data shows that many of the injuries are taking place in practice,” White said. High school football coaches are fully supportive of the new safety regulations. In fact, they recommended the changes last fall. White said his organization reviewed the recommendations made by the New Jersey Football Coaches Association and adopted them.

The effort to enhance safety regulations for football players has evolved over many years.

Concern began to gather momentum back in 2002, when long-time Pittsburgh Steeler football player Mike Webster died at the age of 50. According to the book, “League of Denial: The NFL, Concussions, and the Battle for Truth,” Webster’s autopsy showed his brain suffered from chronic traumatic encephalopathy, or CTE. The autopsy was performed by pathologist Bennet Omalu, the Nigerian-born doctor who first discovered how widespread CTE had become in football players.

In the years since Webster’s death, dozens of professional players came forward and shared their symptoms. Hall of Fame linebacker Junior Seau committed suicide in 2012, and it was later revealed he had been suffering from CTE.
In the 2015 film, “Concussion,” actor Will Smith portrayed Omalu. The movie showed how the National Football League tried to suppress and ignore the doctor’s research.

Since then, the NFL has agreed to pay $1 billion in claims to more than 1,700 retired players for the brain damage they suffered.
In New Jersey, even though the number of students playing football has fallen by more than 16 percent, there are still more than 23,000 students playing the sport. Eleven high schools have stopped fielding football teams since 2012. Today there are 343 high school football programs in the state.
Joanna Boyd, public education coordinator of the Brain Injury Association of New Jersey, says that’s a good thing.

“The goal is not to discourage participation in high school sports,” she said. “If I had a chance to talk with parents, I would encourage them to make sure that their school offers them a meeting so the school can introduce the parents to the measures that have been put in place to keep their kids safe.”
Most schools, she said, have a team trained to recognize concussion symptoms and protect student athletes.

A recent study by Rutgers researcher Derek G. Shendell shows that there is still work to be done, in some ways, to protect student athletes from themselves.

Sixteen percent of injured players delayed or failed to report concussions to coaches or athletic trainers, and they continued to play either in practice or during a game, according to Shendell’s study.

“Adolescents may be at a greater risk for adverse medical, psychological, social and educational effects due to concussions,” according to Shendell’s study. “High school years are a period of growth, maturation, and brain development. Since full brain maturation is not achieved until age 25, it is possible that brain trauma sustained during the high school years could possibly have long-lasting, if not irreversible, adverse effects.”
Boyd, from the brain injury association, praised the NJSIAA for taking action.

“There is so much more to learning the game and playing the game well without the need for contact in practice. Is it more important to develop skills or to hit each other?” she asked. “Let’s save the hits for the game.”

Steven Shohfi, NJSIAA second vice president and at-large representative from the New Jersey School Boards Association, said during a recent NJSBA podcast with host Ray Pinney that he strongly believed in the value of school sports.

“The importance of athletics in public education can’t be overstated,” Shohfi said. “Athletics oftentimes is a catalyst for overall school pride and school spirit.” 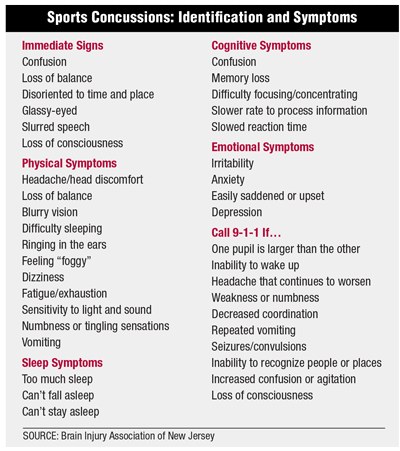 “It teaches you those core values like perseverance, diligence and teamwork, sacrifice for the common good, for the team,” White said.

According to White, in 2010, New Jersey, became one of the first states to develop a concussion policy, and a return-to-play policy. Referees were trained to recognize the symptoms of concussion.

In addition, the NJSIAA said that a student with a concussion could only be allowed to return to play after being examined, and cleared to return to the game, by a doctor.

With new safety regulations in place, White said in a later interview that he feels confident that the benefits of participating in a high school football program can outweigh the risks.

“There are benefits to participating,” he said. “Getting outside, practicing, running, getting in shape.”

Of the four sports he’s played, White said football taught him the most about working with others.

“In baseball, if you have a dominating pitcher, the right fielder, the left fielder can just stay out there and watch the clouds go by,” he said. Football is different.

“You need all 11 of your players literally on the same page, or you’re not going to be successful,” he said. “It’s truly a team game, and that’s important.”

Soccer Is on the Rise in Jersey High Schools. So Are Concussions 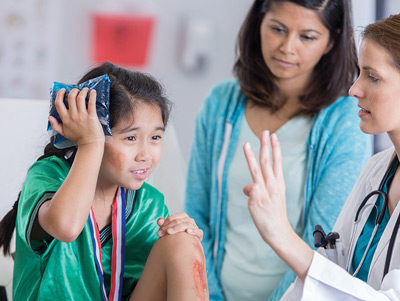 While more student athletes play football in New Jersey than any other sport, its popularity is slipping.

Unfortunately, the number of reported concussions has also increased—especially among young women playing soccer. In fact, high school girls have significantly higher concussion rates than boys, according to research presented at the 2017 Annual Meeting of the American Academy of Orthopaedic Surgeons.

The study’s authors said girls might face a greater risk of concussions and other injuries in soccer due to a lack of protective gear, an emphasis on in-game contact and the practice of “headers,” or hitting the ball with your head.

For girls’ soccer, there were 205,657 injuries reported by high schools throughout the country. Thirty-three percent of those injuries were concussions.

Boys’ football programs reported 567,257 injuries, and 25 percent of those were concussions, according to the National High School Sports-Related Injury Surveillance Study, which collects and analyzes data submitted by thousands of high school sports programs.

In February, the New Jersey State Interscholastic Athletic Association (NJSIAA) announced new regulations that would limit contact between football players to 15 minutes a week in practice. The regulations don’t apply to soccer programs.

To require soccer players to wear protective headgear, or to ban “headers” during practice or games, would “fundamentally change the whole way the game is played,” said Larry White, executive director of the NJSIAA.

He said every coach, in every sport in New Jersey, is trained to recognize concussion symptoms and to immediately remove players from a game if coaches or referees suspect an injury has occurred. Players are not allowed to return to the field until they have passed an extensive concussion protocol. New Jersey “leads the nation,” White said, in protecting its student athletes.