Over the past few years, the emergence of the electronic cigarette industry has put a new generation of young people — beginning with current middle and high school students — at risk of becoming addicted to nicotine. E-cigarette use poses a significant, yet avoidable, health risk to young people. Using these products increases the possibility of nicotine addiction and long-term harm to brain development and respiratory health. Statistics also show e-cigarette use is associated with combined use of other tobacco products that can do even more damage to the body.

The same study showed that between 2017 and 2018, the use of flavored e-cigarettes has increased 60 percent among high school students who currently use e-cigarettes.

The Basics An electronic cigarette (e-cigarette) is a battery-powered heating device that does not burn or use tobacco leaves but instead delivers nicotine, when nicotine is present, in the form of an aerosol that the user then inhales.

Many of these devices are manufactured overseas and are not currently regulated under the Food and Drug Administration’s (FDA) regulations. The components of an e-cigarette include the battery; which powers the atomizer. The atomizer is the heating element that heats the e-liquid and is often coil-shaped. The e-liquid is added into the cartridge; which comes in a variety of sizes. When the e-liquid is heated, it creates the aerosol that is inhaled. E-cigarettes can be disposable, for one-time use, or refillable and rechargeable for repeated use. The refillable and rechargeable e-cigarettes come in medium and large tank (cartridge) styles and are sometimes referred to as “mods.” There are also e-cigars and e-pipes. As of October, three quarters of the e-cigarette market is currently controlled by an e-cigarette product called JUUL.

JUUL (pronounced “jewel”) is produced by JUUL Labs, Inc. in California and, until recently, was only available online. Now, convenience stores sell JUUL at a discounted price. JUUL is a small, slick black e-cigarette that looks like a USB flash drive and is rechargeable. They can be easily hidden in a pocket or a fist. JUUL uses prefilled “pods” of e-liquids that contain high levels of nicotine, flavorings and other substances. The terminology of using the device is called “juuling.” JUUL comes in youth-friendly flavors such as mango, cool mint, and fruit medley. The nicotine in one JUUL pod is equivalent to the amount of nicotine in an entire pack of cigarettes, putting kids at a greater risk of addiction.

The aerosol produced by JUUL is not as noticeable as other e-cigarettes, making it difficult to detect. Youth are using JUUL in schools and sharing them with their peers. USA Today reported that 63 percent of young people ages 15 – 24 who use JUUL are not aware that the product always contains nicotine.
What makes JUUL so unique is its nicotine salt formula. JUUL claims that their nicotine salt formulation increases the rate and amount of nicotine delivered into the blood, compared with other formulations, and that delivery of nicotine by a JUUL is 2.7 times faster than other e-cigs. JUUL is also one of the first major e-cig brands to rely heavily on social media to market and promote its products. JUUL’s website provides the following warnings:

There is a misperception that e-cigarettes do not contain nicotine and that the e-liquid is just harmless water vapor. However, the aerosol (aka “vapor”) from e-cigarettes is not harmless. It can contain harmful chemicals, including nicotine, propylene glycol or glycerin, and flavoring such as diacetyl, a chemical linked to a serious lung disease. Some e-cigarette manufacturers claim these ingredients are safe because they meet the FDA definition of “Generally Recognized as Safe” for food additives. However, they have not been approved for inhalation.

The ingredients and concentration of the nicotine in e-liquids are inconsistent and difficult to find on packaging. Currently, there are more than 15,000 flavors of e-liquid available, with names like “unicorn puke” or “fruit medley,” clearly created to attract youth. According to the Surgeon General’s report, 85 percent of e-cigarette users ages 12-17 stated that appealing flavors was a reason for initiation of e-cigarette use. 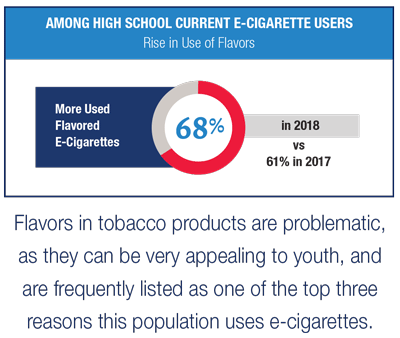 Other chemicals found in e-cigarettes can include: ultrafine particles that can be inhaled deep into the lungs; volatile organic compounds such as benzene, which is found in car exhaust; and heavy metals, such as nickel, tin, and lead. Scientists are still working to understand more fully the health effects and harmful doses of e-cigarette contents when heated and turned into an aerosol, both for active users who inhale from a device and for those who are exposed to the aerosol secondhand. The effects of many of these inhaled ingredients are largely unknown.

Many of these ads glamorize e-cigarettes with celebrity and sports figure endorsements that target youth, prompting concern among health officials that e-cigarettes will become a path to smoking among young people who otherwise would not have experimented.

In January 2010, New Jersey included e-cigarettes in the 2006 Clean Indoor Air Act. In November 2017, N.J. raised the age of sale to 21 of all tobacco products, including electronic devices. The New Jersey Department of Health, Office of Tobacco Free, Nutrition, and Fitness’ statewide initiative, Tobacco Free for a Healthy NJ (TFHNJ), provides education on e-cigarettes for professionals and parents as well as a statewide youth engagement initiative for young people to educate their peers. Youth can be directed to TFHNJ’s “DontgetVapedIn” website and social media outlets to learn more about the dangers and risks of experimenting with e-cigarettes.

The New Jersey School Boards Association Policy Service has received several requests for policy on vaping. Board members and administrators are also expressing concerns that students are using these devices to inhale drugs and specifically marijuana and Flakka, a water soluble, “bath-salt-type” drug that produces a feeling of euphoria. They are concerned that vaporized drugs do not have the telltale and often pungent scent associated with the combustible versions and that students are using these devices to hide their drug use.

Each board is required to develop policies and procedures prohibiting smoking in school facilities and on school grounds (N.J.A.C. 6A:26-12.2(a) 4).
The use of electronic smoking devices is prohibited on school grounds and all other places smoking is prohibited by the New Jersey Smoke Free Air Act (N.J.S.A. 26:3D-55 et seq.). Therefore, any student caught using the device is in violation of law and mandatory school policy regardless of what is in the device.

The possession of drugs and any suspicion that a student is under the influence of a drug or alcohol requires the implementation of mandatory policy and procedures for substance abuse (model policy 5131.6 Substance Abuse and N.J.A.C. 6A:16-4.1 et seq.). Requirements include reporting suspicion of substance abuse, intervention, supervision of any student suspected of being under the influence of drugs or alcohol and medical examination. In addition, policy and law require that staff members receive in-service training in the identification of the symptoms and behavioral patterns which might indicate that a child may be involved in substance abuse (N.J.S.A. 18A:40A-15). Therefore, if a student is caught using the electronic smoking device and there is any physical or behavioral indicator that the student may be under the influence of drugs, all district substance abuse reporting and intervention procedures apply.

NJSBA critical policies and legal references 3515 Smoking Prohibition and 5131.6 Substance Abuse may be downloaded from NJSBA’s Critical Policy Reference Manual. For sample and model regulations covering smoking and substance abuse and other related topics or for help developing policy and regulation language to suit your needs do not hesitate to contact NJSBA Policy Services.

“E-Cigarette Use Among Youth and Young Adults,” U.S. Department of Health and Human Services, Office of the Surgeon General.

“Talk With Your Teen About E-Cigarettes: A Tip Sheet for Parents,” Centers for Disease Control and Prevention.

“Don’t Get Vaped In,”  from Tobacco-Free for a Healthy NJ