Even the best efforts to increase student achievement cannot succeed if students are not in school.

A recent study showed that far too often in New Jersey, students are not attending class. Some 125,000 of the state’s public school children, or almost 10 percent of roughly 1.3 million K-12 students, were considered “chronically absent” in the 2013-2014 school year, according to “Showing Up Matters: the State of Chronic Absenteeism in New Jersey,” released in September by Advocates for Children of New Jersey (ACNJ).

Nationally, too many desks are empty as well. While chronic absence is not a problem everywhere, a 2011 report by the organization Attendance Works said nearly 10 percent of kindergartners and first-graders across the U.S. are chronically absent. In some communities, chronic early absence can affect a quarter of all students in grades K-3, the report said.

What is Chronic Absenteeism Chronic absenteeism is different than truancy. While New Jersey currently has no statewide definition for chronic absenteeism, a student is considered chronically absent if he or she misses 18 days or more in a 180-day school year, or about two days per month, according to ACNJ. Both excused and unexcused absences count toward chronic absenteeism.

In high-poverty and minority districts, and in the early grades, the problem is worse. A follow-up report by ACNJ, “Showing Up Matters: Newark Chronic Absenteeism in the Early Years,” released in January, found that in Newark, some 4,328 students in grades K-3 were chronically absent during the 2013-14 school year. That means nearly one in four children in the early elementary grades in the state’s largest city, including both traditional public and charter schools, missed 10 percent or more of school days, according to statistics from the state Department of Education and Newark Public Schools.

Rain Slickers and Assemblies But the good news is there are practices that can help. In  one Cape May County district, Woodbine, where 81 percent of students qualify for free- and reduced-price lunch, school staff posted banners in Spanish and English to highlight the importance of attendance, and celebrated good attendance. But when educators there noticed absenteeism spiked on rainy days – in a district with no busing – they discovered many parents lacked rain slickers for their children. The superintendent wrote a grant proposal to purchase slickers, and after the rain gear was distributed, attendance improved.

To look in depth at the problem of chronic absenteeism, School Leader interviewed Cynthia Rice, a senior policy analyst for Advocates for Children of New Jersey, lead author of the statewide Showing Up Matters report, and co-author of the Newark report.

In ACNJ’s two reports, you described chronic absenteeism as a significant problem in New Jersey. Can you sum up the major points of your findings? At which grade levels, and where, is it the worst?

What we saw from the state report was that chronic absenteeism seems to be a silent problem. What we saw was that there were about 125,000 students in 2013-2014 that would be considered chronically absent, and it’s a U-shaped curve – lots of kids missing at the beginning of their education, and lots at the end. Two very, very important times in students’ lives.

Chronic absenteeism counts excused absence days, such as when a child is sick. Why is that? Why should a child be considered chronically absent if he or she is legitimately home from school, with an illness or injury?

You’re not talking about a kid who’s had a bad cold or the flu for three days, you’re talking about a kid who misses school over and over. Eighteen days of school, that’s a lot of days. In Newark, for example, a tremendous number of kids are missing school because of chronic asthma. These are not just school issues, these are community issues. Is there a way that a community can address the issue holistically?

The problem sounds pretty simple: If a child is not in school, he or she isn’t learning. Can you explain the effect of chronic absenteeism in a bit more detail?

For a young child, think about what’s going on in his or her life. That foundation is key. When a child misses too much school, that’s going to affect whether they’re reading on grade level. A child who misses in kindergarten, is more likely to be chronically absent in their years to come. The same thing goes at the high school level. To determine whether a student is actually going to graduate high school, their 9th grade absenteeism is more reflective of their success than their 8th grade test scores. It really does matter.

Do you believe schools, school boards and districts are aware of the problem, and are they starting to address this, or not?

I think even since September they’ve come a long way, and that’s a very positive thing. But I’m not so sure they’re looking at the depth they should. Are they looking at trends, for example, why one grade’s absenteeism rate is higher than another? If districts aren’t looking at the data then asking why, it’s a missed opportunity to try to resolve the issues.

What can school boards specifically do to help?

I think a positive thing is just be aware of what’s going on in their schools, and asking about them. Making sure they are looking at chronic absenteeism, and not just average daily attendance. Ask about the data, and how are we addressing these numbers? What are our plans? The goal is for kids to be in school.

Your research cited some great examples of ways schools and districts are addressing the problem. In Woodbine, for example, in Cape May County, when school staff discovered children weren’t walking to school on rainy days because they lacked rain slickers, the superintendent sought grant money to buy them. Can you name some other specific steps districts and schools have taken?

Woodbine’s solution isn’t the answer for every district – you can’t do that in Newark – but it solved their problem! But the way the superintendent there went about it, the equation is the same: Look at the data, and ask some questions. Paterson did some interesting things, they have a significant chronic asthma issue, which is always a big issue when there were fire drills. What would happen is, kids would stand outside for 20 minutes, then get sick and miss school for a few days. So the principal of one school, School No. 5, worked it out so when there is a fire drill, her five or six most severe asthmatic kids go stand in the bodega across the street. It’s just thinking outside the box. In Paterson, kids also wear a uniform, and there were some kids that didn’t come to school because their uniform wasn’t clean, they didn’t have a washing machine. So at the same school, the principal said to just put on a t-shirt and pants and come to school. The goal is to educate kids, not to worry about whether they’re wearing their uniform.

What is the role of the New Jersey Department of Education in addressing the issue?

First of all, to NJDOE’s credit, we had a great working relationship in putting together the data and moving forward. We’re just hoping they will support the next steps in talking about it more. It really is a silent problem, making sure schools are taking steps to look at the data and ask those important questions. We’re hoping the legislation will pass; we see that it will define the data, and help address those schools that are struggling. 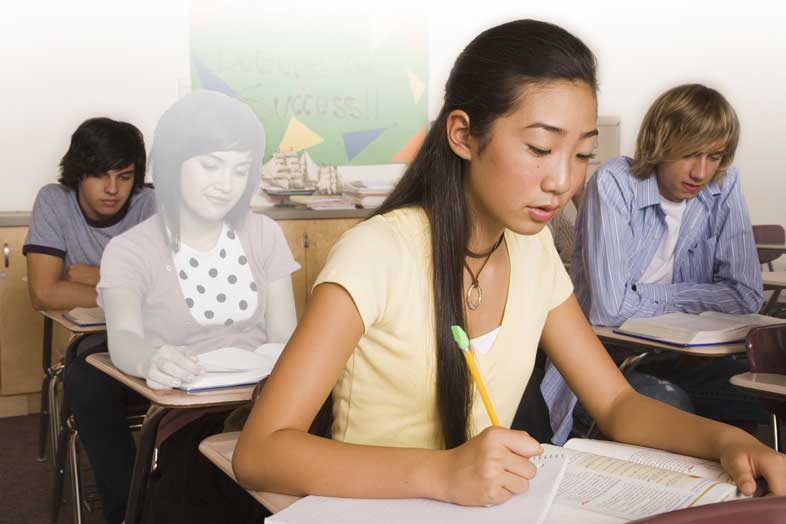 A New Jersey report shows that among the 125,000 students considered chronically absent in the state in 2013-2014, absenteeism was concentrated at the beginning and at the end of their education.