Like most government entities, New Jersey school districts are constantly advised that they must learn to do more with less. One way districts can do that is by using short-term borrowing for capital needs.

Five-Year Borrowing for Equipment and Capital NeedsWith the exception of borrowing for energy improvements and financing school bus acquisitions, New Jersey school districts must get voter approval for borrowing in excess of five years. Given those limitations, five-year loans for equipment and capital needs are a viable option. Items such as computers, security cameras, maintenance and HVAC equipment can be financed through a lease-purchase of up to five years. School buses can be financed up to 10 years. Certain capital projects can also be financed through a five-year lease-purchase, but the financing process differs from that of the equipment lease.

Types of Equipment, Useful Life and Budget Planning If your district can comfortably afford to purchase equipment, this option might not be for you, but for many items that are required for school district operations, equipment lease-purchase will allow you to get the equipment you need now with minimal interest cost.

Items such as computers, other technology equipment, security cameras and related equipment, HVAC equipment and even turf fields and windows can be acquired through a lease-purchase financing. The actual bidding and acquisition of the equipment is accomplished through the normal purchasing process for public schools, but financing the acquisition through a five-year lease is cost effective. As a rule of thumb, public agencies should never finance these items through the financing option offered by vendors as they offer commercial rates which are much higher than those available to public agencies.

As was mentioned previously, most equipment with the exception of school buses can be financed for up to five years and buses can be financed for 10 years. When planning for a lease financing, the useful life of the asset must be determined. An asset such as an iPad that does not have a useful life of five years should not be financed for five years. When bought in quantity, these items can cost hundreds of thousands of dollars, and it is irresponsible to structure a lease that still has payments outstanding when the equipment is no longer usable. Technology equipment is the main exception to this ‘reasonable’ useful life argument. Most equipment like telephone systems or even security cameras can be “squeezed” to get more life out of them, but too often technological advances render computers and or their programs useless in less than five years, so be forewarned! However, it is important to note that equipment leases usually consist of multiple types of equipment, and the useful life of the financing should be the average of all of the equipment. For example, if handheld computer devices are financed along with school buses or security equipment and a telephone system, the average life of the equipment will exceed five years, and a borrowing term of five years will be reasonable.

For budget planning purposes, these lease payments are within the district’s operating budget cap, which is an important consideration when determining the amount that a district can afford. However, once a payment is budgeted, this allocation can allow a district to effectively institute a lease- purchase policy that can consistently finance equipment on an ongoing basis. Equipment lease payments are not required to be level for five years. The payments can be structured in a manner that has payments increasing (or decreasing) each year. This will allow for long-term budget planning and subsequently, a district can implement a long-term financing plan for equipment. For example, if a district budgets $116,920 for an equipment lease-purchase payment, and plans that payment for five years, a $550,000 lease can be structured. Once that five-year lease is over, another $550,000 lease can be structured. Conversely, if a district can afford a $100,000 payment the first year and anticipated that it can increase the payment by $25,000 in each of the next four years, a $750,000 lease purchase can be financed. In any event, once a lease payment is budgeted in the current expense budget, it is wise to keep that allocation “slotted” in the budget to allow for future payments.

Depending on the timing of the lease financing, another repayment option could help a district with phasing in the payments for a lease-purchase. It is possible to structure a five-year lease-purchase over six budget years by having only one (semi-annual) payment in the first fiscal year followed by four years of two semi-annual payments. The final year then has the last semi-annual payment.

Short-Term Financing for Capital Improvement Projects As is the case with equipment leases, as long as the district can afford the repayment of the lease within five years or less, capital projects such as building renovations and additions can also be financed through a five year lease-purchase. Again though, these payments are within the school district’s operating cap, and this needs to be considered as a part of the long-term budget planning process. As was previously mentioned, the repayment structure does not require level payments, so there is some flexibility in the structure of the repayment amount. If for example, the capital project that is being financed will ultimately generate budget savings to the district because of a new program or more efficient operating costs, and savings are expected in years two and three of the lease, the payments can be structured to increase in years two and three. Generally, when financing a capital project, there is no need to consider whether the useful life be less than the lease term. Capital projects such as building renovations or classroom additions will certainly have a useful life in excess of a five-year borrowing term. Possible revenue offsets for a capital lease can be seen as follows:

Authorization and the Financing Process Lease-purchase financings must be bid like any other public bid. The process however is different for the equipment lease and the capital project lease bid. In order to authorize an equipment lease purchase, the board of education must adopt a resolution which provides for the advertisement for the lease financing, establishes a not-to-exceed amount for the lease, and (usually) empowers the business administrator to receive the financing bids and to award to the lowest bidder. This is the generally accepted structure of the equipment lease bid authorization.

Another option would be to authorize the bids, and then following receipt of the bids, the board of education adopts a second resolution awarding the financing bid. It is preferable (from the financing perspective) to use the first option as this allows the successful bidder to be awarded the bid soon after the bids are opened. Because interest rates cannot be held indefinitely, it is preferable to award them as soon as possible following the bid. Following the award of the lease bid, the closing can take place within 30 days of the bid opening.

For a capital project lease bid, the board of education adopts a similar resolution authorizing the advertisement of the lease financing and the not-to-exceed amount of the bid. However, for the financing of a capital lease, the resolution must be approved by a two-thirds majority of the board.

The board of education must also hold a public hearing on the financing when the public is invited to comment on the project and the project’s tax impact. As opposed to the equipment lease process, the school district must, after the public hearing, submit an application to the New Jersey Department of Education’s (NJDOE) Division of Facilities requesting approval of the financing for the project. This approval is separate from any approvals needed for the project, as it is strictly for the financing approval. The actual bid process for the financing of the capital project is the same as the equipment financing bid, only the authorization from the NJDOE is different. As for the closing of the financing, it can take a bit longer for the capital project financing to close, as a title search is necessary. Otherwise, the process is similar and the closing will take between 30 and 45 days.

In summary, short term equipment or capital facilities financing is a tool that New Jersey school districts can use to supplement their budget in order to provide a thorough and efficient education for its students. Using this method of financing on an ongoing basis will allow a school district to have a steady source of revenue for acquisition of equipment and capital projects without having to get voter approval through the referendum process. This method of financing will allow a district to acquire necessary equipment through a five-year financing with minimal interest costs. 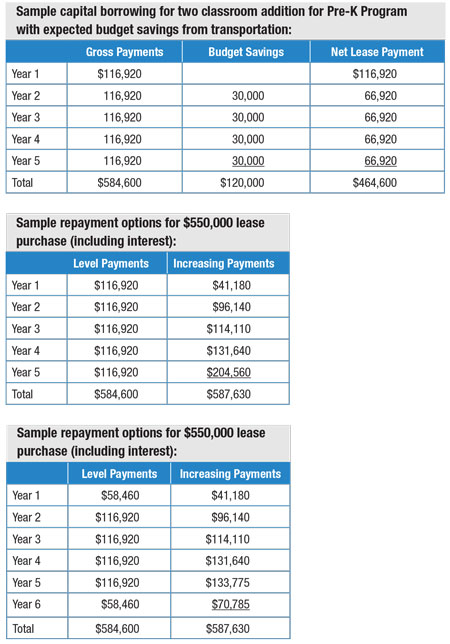