The economy has recovered from the financial crisis and one-year certificates of deposit rates have increased to 2.5 percent. At the same time, 30-year mortgage rates are averaging 4.6 percent. To put this in perspective, in 1983, a one-year certificate of deposit was 9.5 percent and the mortgage on my first home was 13 percent! We can only hope that the increase in borrowing rates do not go as high as 13 percent, but that investment rates on certificates of deposits do go higher than 2.5 percent.

The focus of this article is to describe the best way to take advantage of increasing interest rates when investing the bond proceeds for construction funds. Many New Jersey school district professionals have not experienced the opportunity to earn significant investment earnings from bond proceeds. Beginning now, school district professionals have an opportunity to take advantage of increased interest rates. The cumulative earnings can be used to offset debt service or increase the miscellaneous revenue of the operating budget.

Initial Planning Following the successful approval of a school bond referendum, and during the planning stage of issuing bonds, school district officials should begin to establish the timeline for spending the construction proceeds. This is also referred to as the “drawdown” schedule. From the initial planning stage of a school bond referendum, school district professionals should establish an unofficial schedule for the projects.

For example, most major renovations and roof replacements take place during the summer. Following the successful referendum, the district’s architect can refine the construction schedule to include a drawdown schedule projection. This entails developing a plan of the monthly spending for the construction project. District officials should allow the architect a reasonable amount of time to complete this projection since this is not a task that can be completed without detailed analysis. Each project included in the referendum must be individually broken down to establish the spending timeline. Then, all of the project’s timelines are combined to establish a total monthly project drawdown schedule.

The drawdown schedule of any construction project tends to resemble a bell-shaped curve. In the early stages of the project, the only expenditures likely consist of design and development costs such as architectural design, soil testing, and permitting fees. Then, after the construction bids are completed and awarded, the spending increases as contractors complete their work. Toward the end of the construction period, the curve flattens out again, as the spending decreases to include final contractor payments and retention payments.

Once the drawdown schedule has been established, school officials can use the projections to solicit proposals from investment management firms, which includes banks and other asset management firms. These firms will manage the investment of the bond proceeds with the goal of prudently maximizing the interest earnings on the bond proceeds while also providing necessary liquidity for construction costs.

To demonstrate how interest rates are rising, a sample investment portfolio for a New Jersey School District construction fund from September 2017 produced a gross yield of 1.22 percent. The school district solicited proposals from investment firms and the bond proceeds for that district were not actually fully invested  until January 2018, at which time the average rates increased to 1.64 percent. In September 2018, a similar project’s sample portfolio gross yield (return before investment fees) was estimated to be 2.63 percent. The interest rate at which this school district borrowed the project funds was 2.94 percent. The interest earnings from this construction fund will generate significant income that can be used to offset debt service or to help with miscellaneous revenue.

There Are Limits on How Much Can Be Retained There was a time when public entities could borrow funds at an interest rate that was lower than the interest rates they received on the investment of those funds. The difference in the borrowing rate and the amount earned from investments is called arbitrage. Arbitrage can be either positive (“positive arbitrage”) or negative (“negative arbitrage”) depending on whether the issuer earns more or less than the average borrowing rate of the bonds. The Internal Revenue Service (IRS) has strict rules governing arbitrage. In the event an issuer earns positive arbitrage, the IRS imposes a 100 percent tax on the excess earnings. Public entities cannot borrow funds on a tax-exempt basis and earn (and keep) the investment proceeds for those funds without limitation. 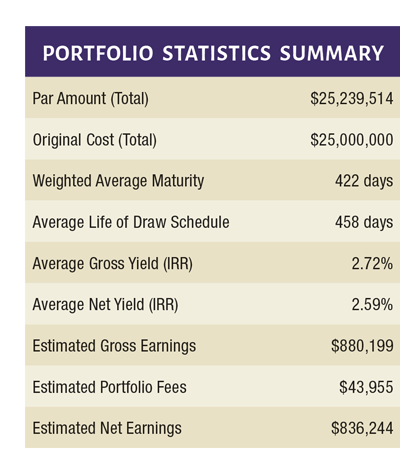 There are exceptions that allow issuers to retain excess investment earnings. One is called the small issuer exception. If an issuer of tax-exempt governmental bonds does not issue more than $5 million in tax-exempt debt during the calendar year, they will be considered a small issuer. Providing that the small issuer spends 100 percent of its bond proceeds within three years from the issue date of the bonds, they will be able to retain all investment income earned. The $5 million limitation is increased to $15 million as long as at least $10 million is for public school construction.

6-Month Spending Exception. This is perhaps the easiest of the spending exceptions to understand and apply. This spending exception is available for all tax-exempt new money and refunding bond issues. As long as 100 percent of the gross proceeds of the issue are expended within six months, the issue will qualify for and meet the requirements of the 6-month spending exception.

18-Month Spending Exception. This spending exception is available for any new tax-exempt bond issue. The expenditure of the gross proceeds of the issue must be spent in accordance with the following schedule:

2-Year Spending Exception. This final spending exception is only available for tax-exempt new construction bond issues. The expenditure of the available construction proceeds of the issue must be spent in accordance with the following schedule:

For all of the above referenced spending exceptions, each six-month benchmark must be met, or the exception will no longer apply. In other words, you cannot “catch-up” by the final benchmark and still have the exception apply.

The Importance of Monitoring It is extremely important to track the investment earnings as well as the expenditures of the bond proceeds. These funds must be monitored from the day of the bond closing to accurately account for the earnings and spending. If the activity for either the spending or investing is not kept up-to-date, it is very difficult to correctly monitor the activity. Whether a rebate is required or not, an arbitrage report must be completed five years after the issuance of bonds, and every five years thereafter until the bonds mature or are redeemed.

How Can an Issuer Track Spending and Investing? A professional investment manager can assist the school district in monitoring this activity. As was mentioned previously, in recent memory, municipal issuers have not had to monitor this activity because investment earnings were so much lower than the borrowing rates. There was no risk of earning positive arbitrage.

It is safe to assume that many school district professionals that have been in the business for the past ten to 15 years have not had to become familiar with arbitrage. Now that interest rates are rising, it would benefit the issuer to pay an investment (or asset) manager to manage the investments of the bond funds. There is no requirement to hire an outside manager to assist with the investments and record keeping, but it would be prudent to research this function prior to receipt of the bond funds.