State funding for schools is a perennial concern for board of education members. But this year, with many school districts receiving revised state aid numbers after having formulated their budgets, and the passage of Senate Bill 2 (S-2) this past summer, school funding has come to the forefront of state politics.

This law seeks to “rebalance” the state’s funding formula established through the School Funding Reform Act of 2008 (SFRA). But what does rebalance mean; and why did the Legislature feel it was needed? To understand how we got here, a brief review of New Jersey’s school funding history would be helpful.

Pre-SFRA New Jersey  In 1875, New Jersey’s constitution was amended promising all children a “thorough and efficient education.” However, for the next century, little attention was given to what exactly that meant. Although this promise was enshrined in the state constitution, education funding was left almost exclusively to the purview of local governments, which funded their schools via local property taxes.

By the 1970s, the state Supreme Court ruled poorer school districts did not have the tax base necessary to fulfill the promise of the “thorough and efficient” education and it was the state’s responsibility to rectify the situation (Robinson v. Cahill). In response, the Public School Education Act, Chapter 212 came into existence in 1975. One year later, after the New Jersey Supreme Court closed all the schools in the state for failure to fund Chapter 212 properly, the state’s first income tax came into existence.

Consequently, the proportion of the state budget dedicated to education jumped to 40 percent, where it roughly stands today. How that money is spent and who it is dedicated to has been a constant source of friction ever since. Three decades, multiple funding plans and even more lawsuits later, the state still was not meeting its “thorough and efficient” obligations, according to the state Supreme Court. In this context the SFRA was born.

SFRA: “A Formula for Success” By 2008, the state had consistently lost in court on the issue of providing a “thorough and efficient education.” Then-Governor Jon Corzine sought to try a different tack. Whereas previous efforts toward school funding emphasized parity in spending between the richest and poorest districts, the Corzine administration sought adequacy. In other words, it asked: What will it cost each district to provide an education that adequately meets the thorough and efficient threshold?

It is in this context the SFRA was born. What the SFRA does is calculate the cost of providing each individual student an adequate education. The cost to educate one elementary school child (currently $11,009) represents a baseline cost. Then, there are various additional weights that may add to that cost. Factors such as limited English proficiency, poverty level and grade level are such additional weights.

The sum of all of these costs per student in a district provides a district’s “adequacy budget.” As a measure against over-classification, the weight added for special education is the statewide average rather than an individual headcount. The state then calculates how much a district can afford to provide towards this adequate budget (the “local share”), and provides the difference in state aid. A district’s equalized property wealth and the wealth of its residents are the factors used in this determination.

Nothing in the SFRA precludes a district from spending above adequacy, but that is up to the local district. The SFRA is simply concerned with ensuring a district, at minimum, is meeting minimum adequacy standards.

This was the plan crafted by the Corzine administration and presented to the Legislature for passage. What was not anticipated was the new SFRA formula would lead to over 180 districts receiving less aid than under its predecessor. This was due in part to changing priorities in the SFRA, but mostly due to changes at the district level since the last time their student populations had been surveyed. Decreased student populations in general, decreases specifically in needier populations (free lunch recipients, English language learners, etc.) and/or growth in the local tax base contributed to these changes.

Faced with these cuts, the SFRA did not have sufficient votes in the Legislature to pass. To garner the necessary support, a provision was included that no district was to receive less aid than the previous year and districts facing such a predicament had their aid adjusted (a concept called   “adjustment aid”) accordingly. This was similar to hold harmless provisions in the funding formula that preceded the SFRA.

However, to pay for the additional $850 million-plus needed to hold these districts harmless, funding for those districts due to receive increases had to be curtailed. Consequently, the redraft of the SFRA installed “enrollment growth caps,” limiting how much a district’s state aid could increase from year to year.

The Vision vs. Reality The SFRA became law in January 2008 and was first implemented in the fiscal 2009 school year with the expectation that, as the state budget continued to grow, adjustment aid would be phased out as those districts continued to receive more aid through the formula. Further, districts restrained by the enrollment caps would reach full funding over the same period. This did not happen.

The first year of the SFRA, 2008-2009, the new law was fully funded, in part due to an infusion of more than a billion dollars in federal funds from the federal American Recovery and Reinvestment Act of 2009. That one-time funding offset lost state income tax revenues resulting from the Great Recession. By fiscal 2010 (which began July 1, 2009) the ARRA money was gone, however. By early 2010, when Gov. Chris Christie came into office, the state did not have the revenue necessary to provide the funds promised in that year’s budget. Districts received instructions from the state to use their reserves to finish out the school year and this became the new base line for the 2010-2011 state aid figures.

The plan for growing budgets phasing out adjustment aid and enrollment growth caps fell by the wayside. Further, after the initial across-the-board cuts of 2010, the state determined no district was to receive less state aid than the previous year. This decision coupled with tax cuts and a slow economic recovery combined to freeze state aid in time, essentially, for the next seven years.

Today…and Tomorrow The final Christie administration budget (school year 2017-2018) and the budget shutdown over it actually sowed the seeds and foreshadowed the coming of S-2. For years, legislators had heard from districts which had been receiving small percentages of what the true SFRA formula said they deserved. Compounding the problem was the state only had enough revenue to provide about 85 percent of what the formula called for statewide. This culminated in the Legislature, led by Senate President Steve Sweeney, adding $100 million in state aid for fiscal year 2018 as well as redistributing $31 million in adjustment aid. The process repeated itself this past year with the first budget of Gov. Phil Murphy, along with the enactment of S-2.

This legislation, in essence, does two things: repeals the enrollment growth caps immediately and; over a six-year period beginning in fiscal year 2020 (school year 2019-2020) phases out “overfunding” of certain districts to provide more funds to chronically underfunded schools. This law will not affect any districts retroactively, but will be the basis for calculating state aid for 2019-2020 and the subsequent five years.

The state will recalculate state aid using the most up-to-date data concerning student populations, local district aggregate income and local tax ratables. Enrollment growth caps and adjustment aid will no longer be a part of this target number calculation. Districts receiving aid in excess of the target amount will have the overfunded amount reduced on the following schedule: 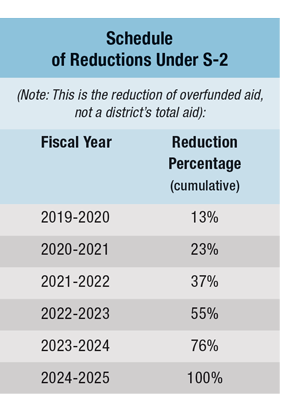 Additionally, for school years 2019-2020 through 2024-2025, a district spending below adequacy that experiences a reduction in state aid will be required to tax to the 2 percent cap. SDA districts (former Abbott) that are not exempt (see below) may exceed the cap to replace any lost state aid.

On the other side of the ledger, districts receiving less than what the SFRA calls for would receive an increase in state aid. Specifically, each district would receive a proportionate share of the total state aid reduction from “over-funded” districts as well as any additional revenue that may be included in the annual appropriations act.

The law does recognize that some districts, despite receiving more state aid than the formula indicates they should receive, may still be below adequacy. Replacing lost state aid with local revenue may not be entirely feasible, especially in light of the 2 percent property tax cap. Consequently, S-2 builds in some exemptions from potential funding reductions. Below-adequacy SDA districts which have municipal tax rates exceeding the state average are exempt from this law. So are non-SDA districts that are at least 10 percent below adequacy and which have local tax rates that exceed the state average by more than 10 percent. County vocational schools, which have no tax base and would have to raise tuition to compensate for any loss, are also exempt.

Approximately two-thirds of the state’s school districts are considered “underfunded” due to the enrollment growth caps, and because state aid allocations have not reflected student population growth since the enactment of SFRA. In addition, 184 districts receive adjustment aid, a statutory provision designed to prevent aid reductions when the school funding system was implemented, but which the Legislature originally intended for phase-out.