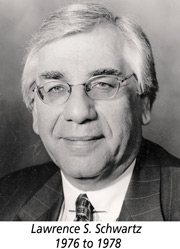 I served as president of the Association for 2 ½ years (1976-1978). Looking back I would have to say the biggest hurdle we had to overcome was the issue of school funding. In July 1975, The Public School Education Act took effect. It was intended to create a formula for state financing of public schools not solely based upon property taxes. However, lawmakers never put a mechanism in place to pay for the Act.

A very memorable event during my tenure at NJSBA occurred on October 27, 1976. I had the privilege of introducing President Gerald R. Ford as the keynote speaker at the 24th Annual Workshop. It was the only time this occurred in NJSBA history. It’s not every day you get to introduce the president of the United States.

NJSBA has always had a successful lobbying track record. During my tenure as association president we also lobbied for and endorsed the first minimum high school graduation requirements, thus ensuring consistent standards for New Jersey students. NJSBA continues to be the premier source for education seminars and professional development opportunities on a wide-range of topics for school board members. I am truly honored and proud to be affiliated with such a respected organization, as a member, as its president and as an attorney. 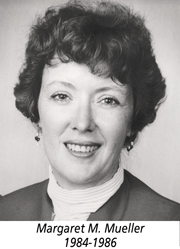 Congratulations, NJSBA!! Three decades ago, when I was serving as your president, we faced the issues of asbestos in the schools, latchkey children, and teen suicide. I will always be indebted to our excellent staff for their continuing support, expertise and dedication to our association, its mission and its members. Here’s to you and the next hundred years! 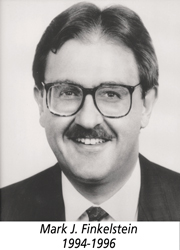 It was a privilege serving as president of the New Jersey School Boards Association (NJSBA) from 1994-1996. Topical issues addressed at that time included shared services and special education. It is ironic that these same issues remain in the forefront.

NJSBA continues to offer an important balance and perspective on statewide educational issues. It values input from its membership. It remains a viable entity within the educational community of New Jersey.

During my years as an officer, I had the good fortune of working with two of the finest presidents NJSBA ever had – Carolyn Smith and the late Jerry Regan. These individuals preceded my presidency and dealt with Association issues during its most tumultuous period. Initiatives that we take for granted today can be directly attributed to their vision and efforts, i.e., Techspo, the creation of the New Jersey Schools Insurance Group, the 100 credit hour requirement to maintain one’s certification and the passage of the School Ethics Act legislation. At that time, NJSBA was seen as a legislative leader with great influence. Legislative conferences were filled to capacity. Our Legislative Session at Workshop attracted several dozen elected officials annually. Delegate Assemblies were day-long events which promoted discussion, compromise and innovative thought. There were lots of dedicated folks who laid the foundation for the future. 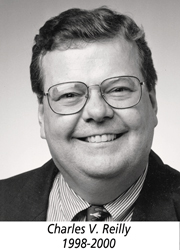 100 years assisting New Jersey School Board members and the children they serve. Truly, an impressive accomplishment! Providing excellent governance is more a task than a talent. It takes each board member focused on student achievement to achieve the goal of providing an excellent education for each child in the member’s school district. During its 100 year existence, NJSBA has provided, and continues to provide, the resources and guidance that results in the achievement of excellent governance by school board members.

Advocacy for policies that best serve the education of New Jersey’s children has also been a hallmark of NJSBA’s efforts over these many years. During my tenure as president (1998-2000), we worked as an Association to move away from the over-reliance on property taxes to fund education to more equitable sources of funding. Policies were developed that called on the state to fund from income tax revenue at least one-half of the cost of public education. The achievement of such a goal would allow for a more equitable distribution of the burden of funding education among New Jersey’s residents and would ensure greater public support for the education of all the children. The Association also fended off a legislative effort to make membership voluntary. School board members throughout the state detailed to their respective legislators the benefits provided by the Association. A strong and united NJSBA is essential to ensure that the services it offers are of the highest caliber.

Congratulations NJSBA and to all those who have made it the success story that it is! 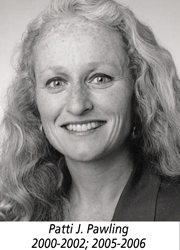 When I was elected president of NJSBA in 2000, I had already been serving as a local board member for 13 years and Vice President for Legislation and Resolutions of the Association for four years. The main issue during all those years was property taxes and reforming the system of paying for public education. While these issues were being battled out within the political community, NJSBA was busy educating its members and lobbying for political outcomes that would benefit the state’s children.

As politics in New Jersey continues today to be viewed by some as a game to be “played,” NJSBA has remained steadfast in its commitment to serving one constituency, the children of New Jersey’s public schools. It is the only educational organization in the state focused on providing the best education for the youth of this state, without also reaping any personal gain. Because of this, NJSBA is highly regarded by state officials and is asked to serve on many educational panels and boards to provide an unbiased voice on issues. This stellar reputation within the educational community is a major strength of the Association.

NJSBA’s strong board member training is another area in which the Association continues to shine today. The Association has changed and grown to serve its members with training opportunities on site, regionally, and online to reach any board member who wants to take advantage of the training. The Association also continues to provide resources for boards of education and school officials on various issues, delivered by a staff of knowledgeable and committed individuals. For that, we should be proud! 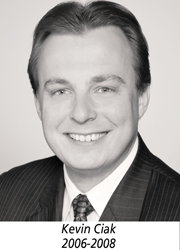 May 2006 through May 2008 marked years of great change and a reaffirmation of our identity as an Association. With the help of our staff, our officers began formally etching in glass what makes our Association unique and truly allows us to serve local school board members – our culture. “The heart of NJSBA is its staff, a group of can-do, supportive people, who pull together as a team to achieve common goals.” What makes our Association special is placed front and center. It’s the first message seen by anyone who sets foot in the conference room at NJSBA headquarters.

Our longtime executive director Edwina Lee retired in 2007 and the board of directors named as her successor Marie Bilik, who served the Association well and now joins me as part of the National School Boards Association team. The words “Accountability Regulations” were heard for the first time and that meant new restrictions on board member travel and the way we provide professional development. The Board of Directors responded by halting an existing plan to build a new conference center in favor of simply refurbishing our existing headquarters. It was a tough decision, but it was really the only responsible decision. Our Association also mourned the passing of two very dear friends, staff members, and extraordinary school board advocates: Carole Larson and Katy Hague. Their spirit lives on today as we carry on their legacy.

Finally, I shared with the board at that time a bold vision: The mission of NJSBA must include ownership for student achievement. It would take a few years for NJSBA to acknowledge this important addition in its mission, but every Association president plants seeds which sometimes don’t germinate for years to come.

Today, I see NJSBA as a leader of student achievement. We continue to adapt to new challenges and the ever-increasing demands of our membership. Corporate partnerships have now become a vital component providing professional development opportunities. The New Board Member Orientation weekend conferences have returned, thanks to generous funding from the Educational Leadership Foundation of New Jersey and our partners. Workshop is better than ever, offering more training, more exhibits, and more opportunities for board members to learn and share their experiences. New Jersey has become a powerful and respected leader at the national level – a seed that was planted by Presidents Glenn Ewan, Patti Pawling, and James Dougherty. I am thankful, however, that one thing has not changed. The heart of NJSBA is still its staff, a group of can-do, supportive people. They continue to work for us as we work for our students.