New Jersey has become the first state in the nation to provide universal access to arts education for all public school students according to the 2019 New Jersey Arts Education Annual Summary Report released in fall 2019 by Arts Ed NJ. The review is based on data from the New Jersey State Department of Education (NJDOE) for the 2017-2018 school year.  This is indeed a historic milestone for arts education, not only in New Jersey, but for our nation.

“I’m proud of New Jersey’s success in providing arts education to our students,” said New Jersey Commissioner of Education Dr. Lamont Repollet. “Research tells us that participation in the arts has a positive effect on academic outcomes, improves school engagement, and is linked with an increased likelihood of attaining a postsecondary degree.”

The announcement took place in September at Paramus High School, which was recognized in 2013 as a Model School in the Arts for the state of New Jersey, with education leaders and dignitaries from across the state, led by New Jersey Gov. Phil Murphy.

“I am grateful that my own education included exposure to the arts, and I know that I would not be where I am today without the skills theatre taught me,” said Gov. Murphy.  “I am proud to announce that all New Jersey public schools are now offering arts education. The future of New Jersey is bright, and today’s announcement is a critical part of ensuring that our children reach their full potential.” 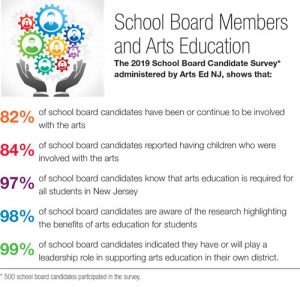 In addition, the diversity and equity of course offerings vary widely across the state, impacting the quality of arts experiences for students.

The Importance of Arts Education The public agrees on the importance of an arts education. According to a 2017 Rutgers-Eagleton Poll, nine out of 10 residents say that receiving an education in the arts — which includes lessons in dance, music, theater, visual arts, media arts, and other forms of creativity — is “very” or “somewhat” important in the classroom (90%), through before or after school programs (93%), and through cultural organizations in their community (89%).

“Research links involvement in the arts with improved school attendance, increased academic performance, and higher levels of college attendance,” said Dr. Lawrence S. Feinsod, executive director of the New Jersey School Boards Association. “For every student who pursues a career in the arts, there are countless others in the STEM (science, technology, engineering and mathematics) areas and other fields, whose lives are enriched through an appreciation of music, painting and other artistic expression.

Universal access to arts education acknowledges the powerful and positive role that the fine, visual and performing arts have on a student’s academic career and life and is a significant accomplishment for New Jersey’s public schools.”

Laying the Foundation for Universal Access  The effort to reach this arts education milestone began more than a decade ago on Sept. 18, 2007, when the collaborative partnership of the New Jersey State Council on the Arts, the New Jersey State Department of Education, the Geraldine R. Dodge Foundation, Playwrights Theatre of New Jersey, and Music for All released the definitive report on the state of arts education in New Jersey schools, “Within Our Power: The Progress, Plight, and Promise of Arts Education for Every Child.”

The project represented two years of work gathering information from more than 98% of New Jersey’s schools and marked the first time that the NJDOE collected information about the implementation of the New Jersey Core Curriculum Content Standards for visual and performing arts. The report looked at how arts education has changed in the prior 20 years in New Jersey and concluded that while the state had come very far, there was still much work to do to bring arts education to every student.

The study was a monumental opportunity for New Jersey to take a leadership role in data collection efforts and paved the road for future reports including Keeping the Promise (2012) and Arts Ed Now: Every Child, Every School (2017). 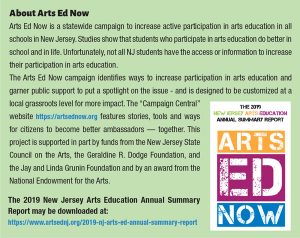 Since 2013 the NJDOE has included arts education measures in the annual School Performance Reports, becoming the first state in the nation to publicly report such measures.

Arts Ed NJ, previously the New Jersey Arts Education Partnership, was established in 2007 to create the proper conditions for arts learning to take place. Arts Ed NJ is the backbone of ARTS ED NOW (www.artsednow.org), a statewide campaign to increase active participation in arts education at all schools in New Jersey.

The primary goal of the ARTS ED NOW campaign was to reach universal access. Since that objective has been achieved, the state’s arts advocates can turn their attention to improving the quality of the arts education experience and to assure inclusive offerings for the state’s students. (See box, “What’s Next for Arts Education in New Jersey,” page 18.)

In certain circles there exists a myth that arts education is for gifted and talented students. This is false. The arts are for everyone, and are just as fundamental to a basic education as math, science, social studies, language arts, physical education and world languages.

What’s Next for Arts Education in New Jersey?

The achievement of universal access to arts instruction represents the current mile marker on a long journey for building strong arts-rich schools and districts across the state. Universal access means all students have programs in their schools. The focus now turns to the quality of programs and equity of instructional opportunities for all students.