Chapter 78, the 2011 health benefits reform law for New Jersey’s public sector, brought some welcome relief to boards of education. For years, boards had struggled to contain the escalating cost of providing employee health coverage. The landmark law, effective beginning with the 2011-2012 school year, requires school employees to pay a portion of health insurance premiums. The exact amount of the employee share is a function of the employee’s salary and the plan that they choose.

The employee contribution component of the law expires after the four year phase-in is complete. Districts and their employees are bound by the contribution levels required in the law until the contributions are fully phased-in and in effect for an entire calendar year. 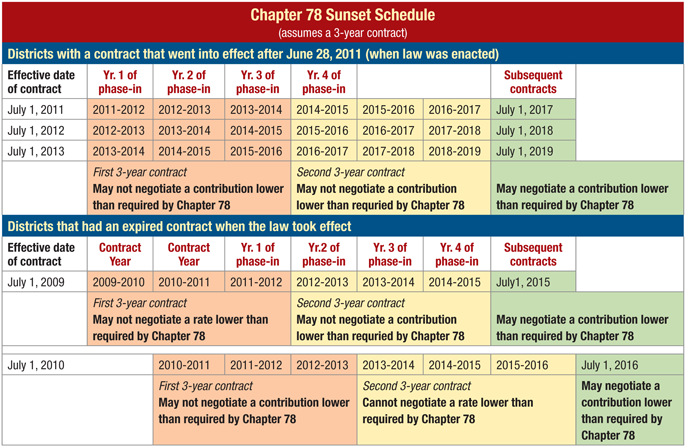 How should health benefit negotiations be handled in the dusk before sunset and after sunset? Below are some points to keep in mind.

First, and most importantly, the fully phased-in premium sharing rates are the basis for future negotiations. The starting point is not the amount set forth in the contract prior to the law. Here it is worth quoting the law at length:

It is clear that it requires the approval of the board to reduce employee contributions below those required under Chapter 78.

Health care contribution negotiations that result in lesser employee contributions cannot take place until after the fully phased-in employee contributions have been in place for a year. In other words, you cannot pre-negotiate the premium sharing to take effect in the second or third year of a three-year agreement when the Chapter 78 sunsets in the middle of that contract.

N.J.S.A. 18A:16-17.2 : parties “who are in negotiations for the next collective negotiation agreement to be executed after the employees in that unit have reached full implementation of the premium share set forth in [Chapter 78] shall conduct negotiations concerning contributions for health care benefits as if the full premium share was included in the prior contract.”

Negotiating Beyond the Sunset

When the parties are negotiating the next collective negotiations agreement to be executed after Chapter 78 sunsets, the board and the union are legally permitted, but in no way obligated, to negotiate some other cost-sharing arrangement. Remember, to reduce employee contributions below those required under Chapter 78 requires the approval of the board. The board can say no. In considering the inevitable proposal from the union to reduce employee health insurance contributions, the board should think long and hard. Prior to Chapter 78 unions were very, very reluctant to open the door to employee’s sharing of premium costs. In fact, in 2009-2010, the last school year before Chapter 78 was adopted, only 13 percent of the contracts analyzed by NJSBA had any employee contribution at all.

As the sun sets on Chapter 78, boards need to remember three important points.

Good luck with your negotiations. If you have questions, contact NJSBA’s labor relations professionals at (609) 278-5219.

View an Education Matters video of the author discussing the Chapter 78 sunset provisions.