NJSBA urges school board negotiations committees to bargain with a primary focus on their board’s ability to pay and what makes sense for their district, rather than relying mainly on comparative settlements in surrounding school districts. Nevertheless, comparative data should not be completely discounted. Board members, especially those on the negotiating team, should be knowledgeable about settlement data and current trends in contract negotiations. Comparative data can provide boards with a sense of what other districts are doing. It can also provide board members with a sense of how competitive their district is in various areas, such as pay and work time, as well as the overall negotiations climate, before sitting down at the negotiating table.

Settlement Rates The results of our continuing surveys to the 194 New Jersey school districts whose teachers’ contracts expired June 30, 2022, with 86% of the districts responding at the time this article was written, has found that a collectively negotiated agreement has been reached in at least half of those districts, some of which are still pending ratification. Further inquiries to those school districts that remain unsettled for the 2022-2023 school year indicate that at least 37% of those districts are at impasse and are now in, or about to go into, the mediation process. There are also still several districts whose teachers’ contract expired June 30, 2021, which have not yet reached a settlement for a successor agreement and are now going through impasse procedures as well.

In addition to any typical salary increase, many boards have considered the realities of the current economic climate of high inflation and the dollar not going as far as it once did. To that end, in certain circumstances, some boards are agreeing to additional adjustments that enable staff to address the higher cost of living. For example, a district may have reached an agreement for 3.25% but added an additional $11,000 for salary guide enhancement, making the effective settlement rate higher than 3.25%.

Public perception of rising settlement rates can be a contentious issue. Reporting the higher percentage rate that is inclusive of any additional monies, even though it would be an accurate reflection of what the district has actually spent on salary increases, can put boards of education in a difficult situation with the taxpayers. Using a “percentage plus dollars” approach makes the salary increase easier to digest because it may be conveyed, for example, as 3.25% rather than the 3.75% the settlement actually costs. The negotiating team should be aware, if making a deal like this, that agreeing to add in additional dollars apart from the agreed upon percentage is not just a one-time injection of extra cash, as the money is now embedded into the salary guide and compounded.

NJSBA is aware this may result in reporting of settlement rates that are not an honest reflection of what the district has actually spent on salary increases over the previous year. School districts are asked on our survey to supply the negotiated settlement rate as a percentage, inclusive of increment (step movement), and inclusive of any longevity increases (if applicable). However, once it was recognized districts were utilizing a “percentage plus dollars” method, our survey now requests the district also supply the amount of any additional monies not reflected in the negotiated percentage increase.

NJSBA makes every attempt to verify the settlement has been reported accurately and requests a copy of the memorandum of agreement from the district to help with that effort, which we may or may not receive. Nonetheless, we continue to encourage boards of education to report the actual effective settlement rate – the total increase to their salary base over the previous year (percentage plus any additional dollars), as high as it may be – when completing our survey. When a district has added additional dollars to the negotiated settlement rate, the reports on our website show an asterisk next to the increase this pertains to, along with a description of what has occurred for that district.

Board Achievements In considering settlement rates, board members should also consider concessions from the teachers association achieved in the bargaining process, which can affect the effective cost of the settlement. For example, a district may have bargained for more student contact time, achieved a cap on tuition reimbursement, moved to a less expensive health insurance plan, eliminated a longevity provision, or obtained some other type of change that can help put those increases in the proper perspective.

NJSBA has determined through individual district surveys that 57% of the new teachers’ contracts that begin with the 2022-2023 cycle have reported some type of concession from the association. Some of those changes include improving salary guides, reducing tuition reimbursement, eliminating longevity and reducing health insurance waiver payments.

ESSER Funds On Aug. 12, 2021, the U.S. Department of Education approved New Jersey’s state plan for the American Rescue Plan Elementary and Secondary School Emergency Relief funds. The purpose of the additional funding is to support local educational agencies in addressing the impact of COVID-19 on educators, students and families. Inevitably, some of those funds have been used for staffing needs – salary and stipend increases, hiring bonuses, hiring additional personnel and to stabilize the workforce to avoid layoffs. The Bureau of Labor Statistics reported an 8.6% decline in the local government education workforce over the previous 12 months, so these funds have enabled school districts to recover some of the losses experienced over the past couple of years. However, because these funds are a one-time appropriation, NJSBA cautions boards about using nonrecurring funding for recurring expenditures.

Starting Salaries To further address staff shortages and enhance their chances of recruiting new teachers, school districts appear to be increasing their minimum pay for new educators. A preliminary look into starting salaries for 2022-2023 is signaling a higher-than-average rise in the Bachelor’s Step 1 salary on new salary guides recently negotiated for this school year. For 2022-2023 salary guides on file at NJSBA, the starting salaries are slightly higher for those salary guides negotiated in 2022 than those negotiated in 2021 or earlier. However, with a limited number of salary guides on file for 2022-2023, NJSBA will continue to monitor the average as we receive additional data.

The length of the contracts is another area that has had a noticeable change from the past two years. Since COVID-19 started, districts were negotiating shorter contract terms, with 18% being of one-year duration in 2021-2022 and 22% in 2020-2021. Currently, only one district has reported a one-year agreement at the time this article was written. On the other hand, 18% of districts that have negotiated a teachers’ contract beginning with the 2022-2023 school year have reported a five-year agreement, when that number typically hovers around 5% of the agreements in any given year.

While three-year agreements still remain the most popular length to negotiate, the increase in longer agreements has never been more apparent. An obvious advantage of longer contracts is that it gives the board a break from negotiations. However, in doing so, it has essentially locked itself into contractual provisions and salary guides that will not be negotiable for an extended period of time. If your board is exploring the possibility of negotiating a five-year salary policy, careful thought should be given to the benefits of a longer agreement versus the potential problems, such as being unable to react to economic factors in a timely fashion. Should your educational goals or economic circumstances change only two or three years into a five-year agreement, the board may be forced to consider program cuts or layoffs.

The table accompanying this story displays a selection of recent settlements reached over the past 12 months or so. More recent and detailed data is available on the NJSBA website where settlements and negotiations data is accessible to members (password required). For specific reports based upon your selected criteria (i.e. similar enrollment group), members may also contact Sandy Raup, business data analyst, at 609-278-5224 or sraup@njsba.org. 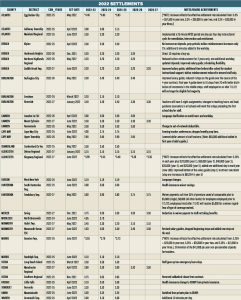